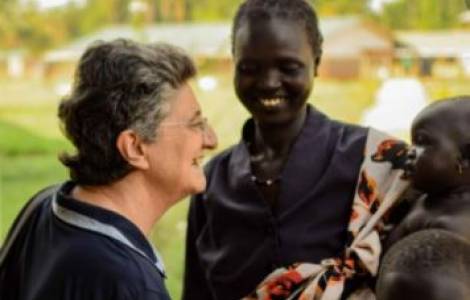 2021-02-17
Ban on gatherings after the rise in new infections: "We also clarify the hygiene rules at church services"

Juba (Agenzia Fides) - "The peace process continues, but very slowly. The appointment of the regional governors, after the formation of the national transitional government, was a very significant step forward that can bring stability (9 out of 10 were appointed, there is still no designation of the Upper Nile Region governor, ed) but in some areas, such as Equatoria, the situation is tense, and there are sporadic clashes between governments and groups that have not signed the 2018 agreement". Sister Elena Balatti, a Comboni missionary and Caritas worker in the diocese of Malakal, South Sudan, thus, speaking with Agenzia Fides, depicts the situation of the pacification process of the African country exactly four months after the power-sharing agreement reached by president Salva Kiir and his deputy Riek Machar Teny, at the head of the Sudan People's Liberation Army-In Opposition (SPLA-IO) rebel movement,
"In addition to the war - notes the missionary - here we have to face various other serious problems.
Meanwhile, the pandemic, but, recently, also the massive rainfall made the rainy season extraordinary and raised the level of the Nile. The waters rise mainly due to the rains, but the catastrophic effect due to climate change should also be emphasized. Crops in many areas have been completely lost and production will be very scarse. I certainly do not want to join the prophets of doom, but the probability that a large section of the population will suffer hunger or food insecurity is very high".
The situation of general impoverishment of the Country, also due to the negative effects of the pandemic, raises many concerns: "The economic situation - she continues - is worrying. The harmful effects of Covid are felt. Much of the Country's GDP is based on the export of oil and with the pandemic, demand and prices have dropped significantly. Furthermore, there is a rampant level of corruption, in various sectors. The revenues would be decent if they were all destined for public spending, but unfortunately they end up in other pockets and this causes a serious crisis that certainly does not help stabilize the country".
The religious notes: "The Church receives many appeals from the population and certainly tries to respond as much as possible, also collaborating with aid workers, NGOs, Caritas from other countries. From a spiritual point of view, the church tries to encourage the population, many young people lose hope due to the current conditions. Our task is to hope against all hope, but if people are hungry, it is difficult to invite them to hope. We need to intervene and I hope that between the possibilities of the Church and those of NGOs, something will be done. If there were a functional and stable government, the situation could be managed much better and the damage could be limited". (LA) (Agenzia Fides, 17/10/2020)

AFRICA/MALI - Missionaries of the Immaculate Conception on the outskirts of Bamako: welcoming mothers in difficulty

AMERICA/NICARAGUA - Bishops to the government: elections, an opportunity to resolve the country's crisis

AMERICA/BRAZIL - REPAM: alarming increase in the number of infections and deaths due to Covid-19 in the pan-Amazon region

ASIA - The next frontier for human development: working "with" and not "against" nature

AFRICA/IVORY COAST - Testimony of a lay missionary about her vocation

AFRICA/DR CONGO - Italian ambassador killed in kidnapping attempt: "He was very close to the missionaries"