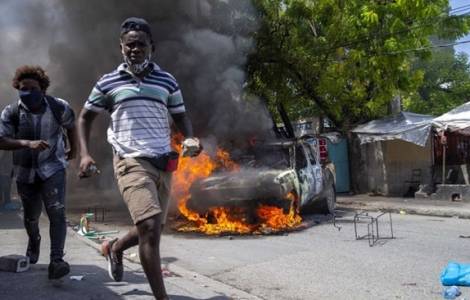 2021-02-03
The Bishops recall that "the law is the same for everyone", even for the Head of State, and invoke dialogue as the only way

2021-01-16
Jesuit report on the state of the country: "The crisis is the result of human action and there are ways out"

2021-01-11
The nun kidnapped on January 8 released by kidnappers; dozens of acts of violence occur every day

2020-12-02
A missionary reports: "The population is losing hope, but we continue to proclaim Christ the Savior"

Port au Prince (Agenzia Fides) - Violence does not stop in Haiti, which in recent weeks has been causing a wave of deaths. On Monday, October 12, Eric Elias Diogène, Senator Youri Latortue’s bodyguard, was shot dead in Delmas, a district of Pétionville, according to information gathered by AlterPresse agency. On the evening of Saturday 10 October, armed bandits on a motorcycle opened fire on female passengers, who had just arrived near Place de Vertières (Carrefour Nazareth, Cap-Haïtien), from Port-au-Prince. Claudette Prévil and Thomas Lozier, returning from the United States of America, were killed instantly.
On Friday 9 October, the police discovered, in an apartment in Pétionville (east of the capital, Port-au-Prince), the lifeless body, with a hole in his head, of Pierre Édouard Rosier, a person known in the social field. On the night between Tuesday 6 and Wednesday 7 October, armed gangs killed more than 10 people and set fire to more than 1,500 houses in the municipality of Saint-Louis du Nord (northwest of Haiti). Each murder leads to demonstrations of popular protest that cause new violence and deaths, by criminal gangs and the army.
On Friday 2 October, a student, Grégory Saint-Hilaire was killed in the premises of the École normale supérieure (Ens) of the State University of Haiti (Ueh), by a bullet in his back, attributed to agents of the General Security Unit of the Palace National (Usgpn). The fact caused reactions among student groups, with violent demonstrations in the following days. On the night between Saturday 26 and Sunday 27 September, pastor Jean-Philippe Quétant and his wife Herna Plancher, both Haitians, who had just returned from the United States of America, were murdered in the city of Croix-des-Bouquets (municipality of northeast of the capital, Port-au-Prince).
On 28 August, the president of the Bar of Port-au-Prince, Monferrier Dorval, was assassinated, by armed individuals, in his private residence, in the same area where the President of Haiti, Jovenel Moïse lives, in the city of Pétionville, east of the capital (see Fides, 1/9/2020).
In addition to the proliferation of weapons on the national territory, impunity and the absence of criminal sanctions for years by the courts against armed gangs are among the main causes of this violence that worries the Haitian population. Faced with this violence, the local Church has always called for peace and to denounce corruption. (CE) (Agenzia Fides, 15/10/2020)

AMERICA/COLOMBIA - The Bishops of Antioquia and Chocó: Christmas asks us for a courageous choice to put an end to violence, corruption, dishonesty and criminality

ASIA/TURKEY - Arrest of a crook who tried to sell the Basilica of St. Anthony