EUROPE FRANCE - Towards Mission Sunday - the Superior of the MEP: Pauline Jaricot and Therese of Lisieux, examples of missionary life 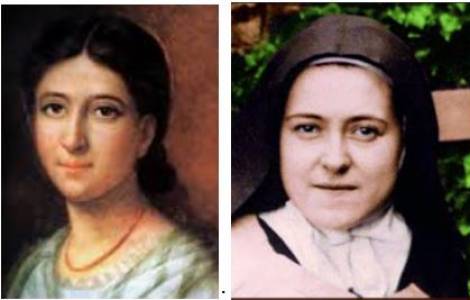 2020-10-12
Towards Mission Sunday - the Superior of the MEP: Pauline Jaricot and Therese of Lisieux, examples of missionary life

2020-07-27
In the memory of Father Hamel, the rejection of all violence and respect for human life

2020-06-03
A PMS website to get to know Pauline Jaricot, who invented "the first missionary social network"

2020-06-01
Mgr. De Brésillac and Pauline Jaricot: protagonists of the extraordinary season of missionary commitment of the 19th century

Rome (Agenzia Fides) - The figure of Venerable Pauline Jaricot "will be able to help the baptized to grow stronger in the missionary path through the network of sharing material offerings and sharing prayer. Today each of us is called to follow this example: to be missionaries by sharing what we have, by sharing our testimonies of life, and above all, by giving ourselves entirely to the Lord because it is there that we find the source and the basis of our missionary enthusiasm. This is a way of happiness, hope and trust, especially in such a difficult period that our planet is going through". This is what Father Gilles Reithinger, Superior General of the Congregation of Foreign Missions of Paris (MEP), told Agenzia Fides, focusing, in view of World Mission Day, on the figure of Venerable Pauline Jaricot (1799-1862), foundress of the Society for the Propagation of the Faith, today one of the four Pontifical Mission Societies. "As priests of the Society of Foreign Missions of Paris (...) we are very grateful and we will soon give thanks for the Beatification of Venerable Pauline Jaricot, after the recognition of the miracle attributed to her".
The missionary adds: "thinking of Saint Thérèse of Lisieux. (1873-1897), Patroness of the Missions, one can see a bond between these young girls who are very humble who show us the way to be completely consecrated to God and to the announcement of the Gospel. The first thing is the consecration to the Lord: they were totally consecrated to the Lord and as a result, they were able to hear this call of the Lord to be missionaries. They had this desire to go to the other side of the world to evangelize, but in the end, not being able to leave physically, they went there with their prayers and their apostolate".
"Pauline Jaricot - recalls the Superior General of the MEP - thanks to the talks with her brother, Phileas, and with Father Denis Chaumont, Superior of the Seminary of Foreign Missions in Paris, she managed to set up this system of the gift of 'a penny a week', which means sharing their goods with missionaries who live in distant lands. But, in addition to material sharing, it is above all a spiritual, ecclesial, fraternal sharing that makes us a great family of hearts, the great family of Our Lord Jesus Christ who shares and supports those called to set out on a mission to announce Christ to those who do not know him".
Father Reithinger continues: "Both wanted to make known the holy name of Our Lord Jesus Christ. From here Pauline was able to develop all the spirituality of sharing, of the gift of oneself for Our Lord as part of this missionary spirituality. This also led to the birth of Bulletins, the Annals of the Propagation of the Faith, which will trace and disseminate the testimonies of missionaries. Those publications have given rise to many missionary vocations ad gentes, therefore beyond our borders", he notes. In this regard, the religious talks about a recent episode: In recent months I went to the funeral of an MEP missionary in a small rural town in France and asked myself how a young man from the French countryside, more than 80 years ago, could imagine going to the other side of the world and spend the rest of his life there. How did the Lord create this missionary vocation. The members of his family told me that the local parish priest, in his homilies and catechesis, read the testimonies reported in the Bulletins of the Pontifical Mission Societies to the children, thus in the life of the confrere, the Holy Spirit made the proclamation of the Gospel his own program of life".
The Congregation of Foreign Missions of Paris has been contributing to the Evangelization of many Asian countries for 360 years: Thailand, Vietnam, China, Cambodia, India, Laos, Japan, Korea, Malaysia, Singapore and Burma. In the twentieth century, the MEP sent many missionaries, 23 of whom were canonized. Today the congregation has over 180 priests and 15 seminarians, while about 150 young people join the congregation's voluntary service every year for a period of two months to two years to experience the mission in the Indian Ocean region. (MM-PA) (Agenzia Fides, 12/10/2020)

AFRICA/BURKINA FASO - World Day of leprosy: Camillian missionaries "alongside the last to announce the Good News"