EUROPE/ROMANIA - Towards World Mission Sunday 2020: "Every baptized person is responsible for evangelization in the world" 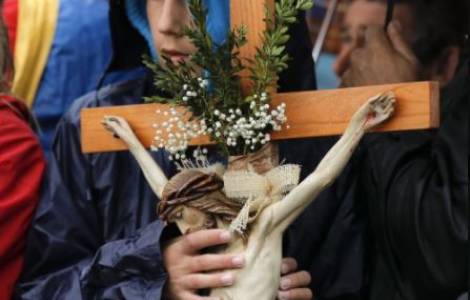 Bucharest (Agenzia Fides) - "In the first week of October we invite all believers in Romania to celebrate a novena for the beatification of Pauline Marie Jaricot at home as well, with which we want to revive the missionary zeal in the hearts of Christians", says to Agenzia Fides Fr. Eugene Blaj, National Director of the Pontifical Mission Societies in Romania, talking about the program organized by the local Church for the Missionary Month, October 2020 and World Mission Sunday this year, which, like in most churches in the world, will be celebrated on October 18th. "On October 17th, adds the Director, the Missionary Rosary will be prayed in the parishes and broadcast nationwide on Radio Maria in various churches in Romania. There will also be public initiatives specifically aimed at young people to proclaim the Gospel: prayer intentions, good deeds and small offerings, coordinated by the children of Missionary Childhood, which reflect the intuition of their founder, Mgr. Charles de Forbin Janson, "A Hail Mary a day and a penny a month". At a parish level, there are other missionary activities for children, young people and adults, "with the aim of inviting all Christians to actively participate", reports Fr. Eugene Blaj.
"A few weeks ago", says Father Eugene, "there was a meeting in the offices of our National Direction with a delegation from the Archdiocese of Bucharest, during which we developed and elaborated proposals for the month of World Mission, although in Romania the conditions for operating in full safety are still uncertain because of the pandemic". The planned initiatives include a presentation of a short film on the activities of the Pontifical Mission Societies in mission countries. "These short videos will be shown in all parishes equipped with television screens", explains the National Director.
On the first Sunday of October, a symposium on this year's Mission Sunday "Here I am, send me" will take place in the major Seminary of the diocese of Casi. It will be broadcast online and will promote awareness of the missions. In addition, the Missionary prayer Vigil is planned for Saturday 17th October in the Cathedral of Bucharest, chaired by Archbishop Aurel Perca. The event will also be broadcast online and will give the believers who need to stay at home the opportunity to pray with many other believers. "This will be followed by a charitable organ concert performed by two young organists in the Cathedral of Bucharest, says Fr. Blaj, with the aim of raising funds for the Pontifical Society for the Propagation of the Faith (POPF)".
Among other things, Father Eugene recalls that "there are also visits to people who live on the streets; prayer meetings with the children of the mission organizations; as well as pilgrimages to the Virgin Mary in various dioceses". "It is important that all believers work together and show solidarity with the weakest. Every baptized, he concludes, is responsible for evangelization in the world".(ES) (Agenzia Fides, 3/10/2020)

EUROPE/SPAIN - The "Pauline Jaricot" Prize to Sister Narváez and Father Maccalli, witnesses of the Gospel

VATICAN - Cardinal Tagle: the reasons why the Holy See renews the provisional Agreement with the government of Beijing on the appointment of Chinese Catholic Bishops

VATICAN - Pope Francis: in the face of de-Christianization, Saint Augustine is more useful than "modernization" plans