AFRICA/KENYA - Being a missionary in Kibera, one of the poorest suburbs in the world; the story of the National Director of the PMS to Fides 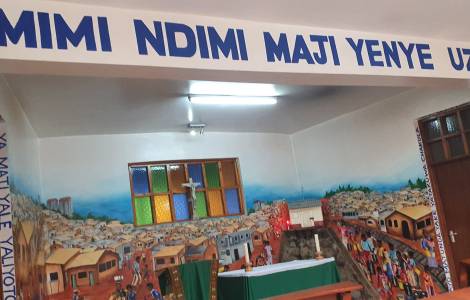 2020-12-15
Christian leaders: "The Country is devastated by Covid-19; but it is possible to rise again with the solidarity of all"

Nairobi (Agenzia Fides) - Priests in one of the poorest suburbs in the world: the slum in Kibera in the Kenyan capital, Nairobi, where Fr. Bonaventure Luchidio, National Director of the Pontifical Mission Societies of Kenya, paid a visit on 24 September. This is his testimony sent to Fides:
" I arrived in the parish of Christ the King and received a warm welcome from Fr. Luis Martinez, a member of the Mexican Society of Our Lady of Guadalupe for Foreign Missions, founded in Mexico. The Congregation is popularly known as the Guadalupe Fathers or Mexican Fathers. Fr. Jose says: "initially Kibera was part of the parishes of Our Lady of Guadalupe, the parish of Adam's Arcade and the parishes of St. Michael's Otiende which are located on the margin of the slum. Each parish used to take care of half of the slum area and the priests used to visit it for pastoral care, visits to the sick, celebration of the sacraments in small Christian communities, and then in the evening they returned to the parish".
This service was not optimal from a pastoral point of view because the priests, although well received in the slum villages, were treated as visitors who come and go from their comforts in the parishes on the margin of the slum.
This feeling of being considered strangers among the people they served challenged the priests to act and come to live closer to the people and to share their plight. The first priest rented a shack to live in the heart of the slums of Kibera. This action of being with the flock and grazing the flock from the inside rather than from the outside, bore much fruit because the priests were accepted and embraced by the community by both Catholics and non-Catholics. They were able to learn the language of the slum and thus reach the hearts of its inhabitants. They were able to come to terms with the real reality of life in the slums, the challenges of housing, the difficulties of water and sanitation, the risk of crime and addictions. They opened up to God and allowed God to challenge them in the adventure of missionary work among the urban poor.
This year after the outbreak of Covid-19, churches were closed and people were unable to attend Mass. Many of the slum dwellers lost their livelihoods, so they couldn't afford one meal a day. The parish therefore instituted the "vase of love" where offerings can be placed for the needy.
"The people of the slums, in their poverty are extremely generous and the culture of sharing is deeply rooted in them", says Fr. Jose. "Most of them arrived in Nairobi with nothing and so they found themselves in Kibera because it is cheap. But without money or a source of income, people suffer from neglect and abuse. Then a good Samaritan comes along and offers a person in need a shoulder to lean on. When this person finds a source of livelihood, he goes into debt to assist those in difficulty, and this is their source of generosity".
While I was still there, Fr. Jose takes me back to the main agenda of the day by reminding me that now, in the missionary month of October, people will be engaged in praying the missionary rosary and visiting the poor, the sick and the vulnerable. Father Jose Martinez turns to me and says, "Fr. Luchidio, how beautiful it would be if you came to celebrate Mass for us on October 18, 2020, for World Mission Sunday". I was shocked because, who can say no to such an invitation? We had agreed with the Cardinal to hold the Holy Mass in the Basilica, but my heart, my missionary heart is in Kibera". (B.L.) (L.M.) (Agenzia Fides, 26/9/2020)