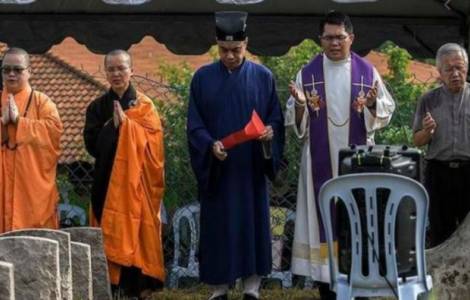 2020-10-16
Catholic schools: tools for evangelization and human development, in partnership with the government

2020-09-18
Interreligious celebrations and prayer for the nation: all united in the fight against the pandemic

2020-09-09
A Bishop in the National Unity Plan Committee, "to build harmony and the common good"

2020-08-31
Archbishop of Kuala Lumpur: taking care of each other is the vocation of the nation

Sarawak (Agenzia Fides) - Prayer unites believers of different religions in Malaysia and increases the spirit of coexistence and national unity. In this context, various religious communities in the Malaysian state of Sarawak organized prayer meetings, attended by believers of different faiths, to celebrate the 57th Malaysia Day, on September 16, which marks the establishment of the Federation of Malaysia, which took place in 1963. As communicated to Fides, the platform called "Union for Religions" in Sarawak held a preparation campaign, marked by interreligious prayer, with the spirit of "working together for development, peace and solidarity".
Every day, from August 31 to September 15, events, assemblies, commemoration meetings were organized in turn in various places of worship in Sibu, Catholic, Protestant, Methodist and Anglican churches, but also Sikh, Baha'i, Hindu, Buddhist and Muslim temples - always respecting the anti Convid-19 rules -. It is a unique initiative of its kind and organized for the first time: the prayers and meetings that united believers concerned topics such as the importance of the Malaysian Constitution, respect for the dignity of life, the blessings received in the history of the nation.
"Among the other elements mentioned, also the pride of preserving one's own multicultural and multireligious heritage: a unique factor, to be celebrated not only on Malaysia Day", Richard Lon, Director of Unifor told Fides. "The aim of these events was to strengthen tolerance and cooperation, deepen people's knowledge of various religions and promote harmony and unity between people of different beliefs and backgrounds", said Richard Lon, reporting that officials, religious institutions, members of NGOs and civil society attended the events.
"Prayer and interreligious dialogue are two forms and ways to strengthen social harmony and work together. The celebration of Malaysia Day is a reminder for all and reminds us of the collective value of mutual well-being and the common good of the nation", says Catherine Ng to Fides, a Catholic woman who took part in the organized meetings.
One aspect that united Malaysians was that of the fight against the Covid-19 pandemic. National Unity Minister Datuk Halimah Mohamed Sadique said all citizens must continue to be aware and responsible, adhering to new operational procedures, as the country struggles to break the chain of infection. He also stressed that "the achievement of the strength of unity among the population is very significant. The prosperity we enjoy is the direct result of the willingness of Malaysians to practice the spirit of unity amidst the diversity of religions, ethnic groups and cultures and represents the foundation of the prosperity of our beloved homeland. Unity will surely ensure the peace of our nation", he said.
Malaysia is a multi-ethnic, multi-cultural and multi-religious country. Its population is made up of nearly 32.7 million people, more than 60% of them Muslim. Catholics represent only 4% of the population. (SD-PA) (Agenzia Fides, 18/9/2020)

VATICAN - India, Panama and Honduras recipients of aid from the PMS Fund for the Covid emergency

ASIA/CAMBODIA - Apostolic Prefect Figaredo: "The poor and the little ones evangelize us"