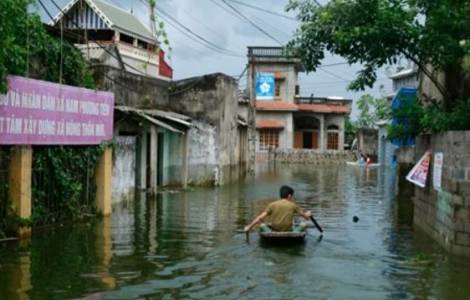 2020-11-24
Commitment of Catholic mass media in Asia for the promotion of peace, truth and solidarity in times of pandemic

2020-11-21
Denunciation of the Landmine Report 2020: Use of mines in conflicts, to the detriment of civilians

2020-11-20
The importance of respecting the rights of the weakest within the framework of the trade agreement in East Asia, a driving force for development

Hong Kong (Agenzia Fides) - The Earth's climate is changing after more than 10,000 years of relative stability, and Asia is the continent most exposed to sudden changes that are fraught with consequences for human communities. In the absence of adaptation and mitigation, the climate risks that the continent will have to face in the future, from heat waves to floods, are likely to be more severe and more intense because the impact of climate change in Asia will be stronger than in many other parts of the world. This is stated by the data contained in a report on the future of Asia, entitled "Climate risk and response in Asia", which the McKinsey Global Institute, an international economic research institute, is preparing to publish by the end of the year. The report - released in a concise version and sent to Agenzia Fides - echoes the alarms of the scientific community and recalls the warning contained in Laudato Sì, the encyclical that promotes "a new culture and a new global governance", recalling that the deterioration of the environment goes hand in hand with that of society and affects the weakest on the planet in a special way.
The analysis of the Report examines several aspects: the average temperature in Asia is expected to increase by more than two degrees by 2050 compared to pre-industrial levels with significant increases in some parts of China, Australia and the Indian subcontinent. These effects, which will begin to be felt in the next decade, will be characterized by "lethal heat waves", events lasting a few days during which the maximum average daily temperature will exceed the survival threshold for a "healthy human being resting in the shade". Large cities in parts of India, Bangladesh and Pakistan could be among the first places in the world to experience heat waves that cross this threshold. And as the earth gets warmer, the share of droughts will increase - in southwestern Australia, for example, or parts of China.
On the contrary, it is claimed, "extreme rainfall" will also increase, which could increase three or four times by 2050 in some areas including eastern Japan, central and eastern China, parts of South Korea and Indonesia.
Important changes will affect the freshwater water supply, which will be affected by factors such as rainfall patterns and evaporation. In several parts of Australia it could decline significantly by 2050 while, conversely, in parts of the Indian subcontinent and China, the water supply could increase by 20%. Typhoons remain lurking: according to experts it will increase their average power, thus increasing the frequency of serious events, which could triple by 2040 in some parts of Asia, including the coastal areas of China, South Korea and Japan.
Faced with these scenarios, Christian communities in Asia live the "Season of Creation", until 4 October, meditating and putting into practice the indications of Laudato Sì, renewing their social commitment and care for the "common home". (MG-PA) (Agenzia Fides, 14/9/2020)

AFRICA/NIGERIA - Is Boko Haram moving to the south following the movements of the Fulani herdsmen?

ASIA/MALAYSIA - The Church in Malaysia, a "field hospital" helping 8 million poor, marginalized and suffering in the midst of the pandemic