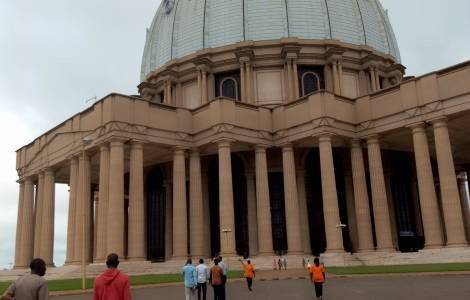 2020-10-24
Presidential elections: meeting of women of all political tendencies to contribute to a peaceful vote

2020-10-16
Archbishop Kouadio launches an appeal for evangelization, on the eve of Mission Sunday

Yamoussoukro (Agenzia Fides) - 10 September 1990 - 10 September 2020, 30 years ago, the Basilica of Notre Dame de la Paix in Yamoussoukro (in the center of the Country) was consecrated by Pope John Paul II in the presence of President Félix Houphouët Boigny.
The jubilee celebrations initially planned for all of 2020, were finally postponed to 2021 due to the coronavirus pandemic.
However, the anniversary, on 10 September 2020, was celebrated with a Thanksgiving Mass.
"The Basilica of Notre Dame de la Paix in Yamoussoukro is a building centered on prayer for peace in the Ivory Coast, in Africa and in the world. These 30 years of existence represent 30 years of grace and blessings for the Ivory Coast", said His Exc. Mgr. Alexis Touably Youlo, Bishop of Agboville and Apostolic Administrator of the diocese of Yamoussoukro.
"As far as the basilica is concerned, I believe that first of all there is a promotion challenge that we have to do. The whole building should have more of a national influence. I think we are not doing enough promotion of the grace offered by the basilica", explains Mgr. Alexis inviting all Ivorians, especially political actors, not to tear themselves apart in useless conflicts, but to take the paths of peace for a reconciled Ivory Coast; "with this basilica there is the challenge of peace that is imposed on all of us Ivorians". "We cannot have this building symbol of peace in the heart of our Country and then tear ourselves apart in useless conflicts", he stressed.
Speaking along the same lines as the apostolic administrator of Yamoussoukro, the rector of the basilica, Fr. Franck Allatin, for his part, added that after 30 years of existence of the Basilica it will be necessary to think about its renovation, urging the Ivorians to think about investing in other structures such as a reception center, a recreation center for pilgrims and tourists . "I think it is necessary that the Ivorians adopt the basilica, which is like their home, come and see this basilica and think about preserving this heritage".
With a total cost estimated at 40 billion CFA francs, the Basilica of Notre Dame de la Paix in Yamoussoukro, financed by the founding father of the Ivory Coast, Félix Houphouët Boigny and consecrated on 10 September 1990 by Pope John Paul II. In 2019, nearly 300,000 people visited it.
It is the largest Catholic religious building in the world with a capacity of 18,000 faithful. Its pastoral management is entrusted to the Fathers of the Society of the Catholic Apostolate commonly called the Pallottine Fathers. (S.S.) (L.M.) (Agenzia Fides, 11/9/2020)