AFRICA/IVORY COAST - Presidential elections in October; Cardinal Kutwa calls for respect for law and for dialogue 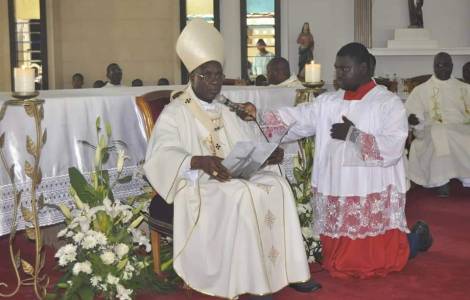 2020-10-24
Presidential elections: meeting of women of all political tendencies to contribute to a peaceful vote

2020-10-16
Archbishop Kouadio launches an appeal for evangelization, on the eve of Mission Sunday

2020-10-01
Laying of the first stone of the City of Peace: "the first visible sign of the financial autonomy of the Church", says the Bishop of Grand-Bassam

Abidjan (Agenzia Fides) - "The socio-political life of our Country has entered a dangerous curve. With the presidential elections approaching, we are forced to note the radicalization of the positions of both sides, which became more pronounced after the President of the Republic announced his re-nomination on 6 August", declared His Eminence Cardinal Jean Pierre Kutwa, Metropolitan Archbishop of Abidjan in a message delivered yesterday, August 31, in a meeting with the press.
Recalling the recent protests that have caused various material damage, countless injuries and even deaths, Cardinal Kutwa said that, after a long moment of silence, in meditation and prayer, he can no longer remain silent "in front of such a sad and dishonorable show for our Country and for Africa". "Can we be silent and leave the present and the future of our Country devoured by sword and fire?" he said.
However, he adds, his responsibility as pastor requires him to utter words of consolation and to invite non-violence, dialogue, respect for the law, "all without which a modern and peaceful State cannot be built".
"The Ivory Coast, our Country is a Country of dialogue by tradition. I urge all Ivorians to resume dialogue so that the word, respectful of differences, takes precedence over attempts to set the Country on fire", he invited.
The Cardinal stresses that one of the means to promote reconciliation is respect for laws much more than elections. "You will agree with me that a negative environment does not bode well for the organization of elections and that reconciliation is more important than elections. This is why it is completely wrong to think that it is enough to organize an election and declare a winner. Once again I beg you: let's be reconciled with each other! Everything else will go by itself", he urged.
"Dura lex, sed lex: it is harsh, but it is the law", he says, urging compliance with the law even when it irritates us and goes against our interests at that moment.
"May everyone, in the exercise of their responsibilities, have the wisdom to do everything in strict compliance with the law and the Constitution, in particular with regard to respect for the right to life".
The Cardinal invited everyone to engage in dialogue and consultation, in search of solutions to this crisis which does not bode well for a better tomorrow as regards to the peaceful organization of elections: "I insist once again to remind you that respect for law is more important than elections". (S.S.) (L.M.) (Agenzia Fides, 1/9/2020)

AFRICA/BENIN - Bishops in view of the election: "It should be peaceful, inclusive and democratic"