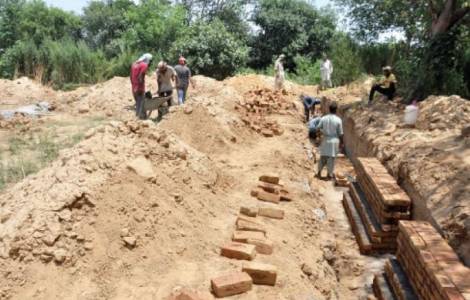 2020-09-09
Christian sentenced to death for "blasphemy"; the Church calls for a government campaign for minority rights

2020-09-03
New priests in Pakistan: hope for the Church in the midst of the pandemic

2020-09-01
Heavy floods in the province of Sindh: Catholic volunteers to help the needy and displaced

2020-08-25
Minority leaders: "Religious intolerance and extremism are growing in Pakistan"

Islamabad (Agenzia Fides) - "It is a fundamental right of every Pakistani citizen to preach and profess his religion freely, as prescribed by the Constitution of Pakistan. It is legitimate that each community has its places of worship. We strongly condemn the movement of fundamentalist individuals and groups who opposed the construction of the Shri Krishna temple in Islamabad, the capital of Pakistan": this is what Christian activist for minority rights Sabir Michael says to Fides, after the works of construction of a Hindu temple stopped abruptly due to the opposition of some Islamic religious leaders and Islamic fundamentalist groups.
Michael notes: "Pakistan is among the signatory states of the Universal Declaration of Human Rights and the International Convention on Social, Civil and Political Rights, which guarantee equal rights for all citizens, including religious minorities. By not allowing religious minorities to freely profess their faith, not only are international human rights laws betrayed, but they also negatively affect the image of Pakistan". The activist continues: "We are not religious minorities captured after a war; we existed in Pakistan before the creation of the nation itself. We are citizens with the same rights and duties, and the government of Pakistan".
The construction of the first Hindu temple in Islamabad, the capital of Pakistan, was temporarily stopped in recent days - on the orders of the Capital Development Authority, a civilian body - after some Islamic clerics and people with a fundamentalist religious approach protested and opposed the construction. Numerous Islamic clerics and Muslim political leaders protested publicly with mass media and social media campaigns.
The Islamic religious Ziauddin Manseharwi of the "Jamia Islamia Ashrafia" organization, an Islamic institute, in a message spread through social media, says: "It is not allowed to build a new temple for Hindus using government funds; building new places of worship for non-Muslims and restoring damaged temples is illegal and means cooperating in sin".
Today civil society organizations complain of the violation of religious freedom, and denounce the increase in extremism, religious hatred and the deterioration of religious tolerance, hoping for the resumption of work.
The plan for the construction of the Hindu temple, in fact, had already been approved in 2017 by the government of Nawaz Sharif, of the Pakistani Muslim League (PML-N), previous to the executive in office today. A 0.5 acre plot of land was assigned to the Hindu community for the temple and a site for cremation. In mid-2020 current Prime Minister Imran Khan approved a public grant of 100 million rupees for the construction of what would be the first Hindu temple in the capital of Pakistan.
Lal Chand Malhi, a Hindu member of the National Assembly of the political party of Imran Khan, said: "This temple in Islamabad would have shown that Pakistan is a place that respects all religions and where coexistence is practiced. When the excavation began in June, the Prime Minister said he was happy that the temple would have given Pakistan a good image for the whole world".
Pakistan's Ulema Council (PUC), an Islamic body, expressed support for the construction of the temple in Islamabad and criticized opponents. Islamic leader Hafiz Mohammad Tahir Mehmood Ashrafi, president of PUC, said: "We denounce the controversy over the construction of the temple by extremist clerics; PUC will convene meetings and also present its views to the Islamic Ideology Council (CII) in Pakistan. Ashrafi adds: "Having a place of worship and living a life according to one's faith and tradition is a right given to all non-Muslims, according to the Constitution of Pakistan; those who oppose the constriction of the temple make an error of interpretation of the sharia, Islamic law".
Meanwhile, after the temporary blocking of construction works, the High Court of Islamabad has not accepted the appeals filed to stop the construction of the Hindu temple and the matter has been referred to the Council of Islamic ideology (CII), an organism officially consulted by the government to review laws passed by Parliament and establish their compliance with Islam. The Council will offer indications to the executive on how to build the Hindu temple and whether public funds can be used to build it. (AG-PA) (Agenzia Fides, 1/8/2020)

AFRICA/EGYPT - Grand Imam of al Azhar: Islam and Christianity have never been at the root of wars