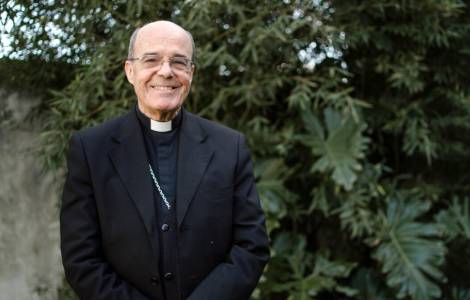 2020-06-26
The Bishops: "Our society must support laws that prevent and discourage any type of euthanasia and assisted suicide"

2020-06-18
Vocational Month: towards a new time of evangelization

2020-05-16
"Let's spread hope": Caritas competition, committed throughout the country since the first signs of the pandemic

Minas (Agenzia Fides) - "Today more than ever we need an enthusiastic collective project in Uruguay: our biggest problem is the lack of population". This is what Mgr. Jaime Fuentes, Bishop Emeritus of Minas wrote in an open letter to lawmakers who are discussing a bill on euthanasia and assisted suicide. According to 2017 data, Uruguay has a population of 3,493,205 inhabitants, in which the range from 0 to 14 years represents 19.9% and that from 15 to 29 23.1%.
"To relieve the suffering of people who have a terminal illness is a widespread desire", writes the Bishop, highlighting that this is a duty of society. He therefore raises the question of whether it is "complete absurdity" to legalize euthanasia and suicide, "in a country that has the highest number of suicides in Latin America and one of the highest in the world". Euthanasia is only legal in five countries (the Netherlands, Belgium, Luxembourg, Canada and Colombia) and assisted suicide is allowed only in Switzerland. In Belgium, after its legalization, there has been a significant increase in euthanasia cases, and the trend is increasing. "Do we want to continue on this path, encouraging potential suicides? Laws influence, for better or for worse, the whole social behavior", reiterates the Bishop.
After highlighting the "macabre message" that reaches the already scarce new generations with this law, Mgr. Fuentes continues: "They say that, with the law, individual freedom to decide when to end one's life will be respected. But don't we live in society and are we not interdependent? If someone sees a person trying to commit suicide, doesn't he try by all means to dissuade him?" With the proposed law, society becomes individualistic, but "forgets that the end does not justify the means. Human life has the greatest dignity and therefore requires the utmost care. Is to decide when to die a human right? Who said it, where is it written?".
Finally, Mgr. Fuentes reiterates that the most serious problem in Uruguay is the lack of population, as in other countries. But where plans have been made to encourage births, the results can be seen: "in our neighbor Paraguay, which in 2000 had about 5 million inhabitants, today there are more than 7 million and its GDP will grow by 4% in 2021". The open letter ends with an invitation: "Lawmakers, studying the problem and working for a better Uruguay is what is expected of you". (SL) (Agenzia Fides, 31/7/2020)

AMERICA/PARAGUAY - The Bishops: "the first work of charity today is to follow the indications of the civil and ecclesiastical authorities"