AMERICA/NICARAGUA - Mgr Alvarez on the national situation: "Need to build a country where the dignity of the person is respected" 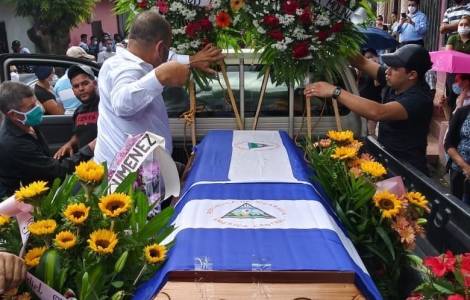 2020-10-20
Family, freedom, dignity and social justice: the pillars on which to build the country

2020-10-01
"Nobody is above the Constitution": Mgr. Mata on the new laws that repress human and political rights

Managua (Agenzia Fides) - "The Inter-American Commission for Human Rights (IACHR) has received information on the murder of Jorge Rizo in La Trinidad, Estelí. The tragic events took place after the victim shouted anti-government slogans at the end of an official demonstration": with these words of the IACHR account of 20 July, Nicaragua can be seen once again experiencing the mourning and tension of repression against defenseless citizens. The case attracted a lot of attention because Jorge Rizo was a young man who was killed only for shouting "Free Nicaragua Life" while a pro-government procession passed in front of his house on July 19th. One of the government sympathizers shot him. The next day, while the funeral was being prepared, his home was set on fire and the firefighters never arrived.
IACHR published a report yesterday, sent to Fides, which reports that government repression in Nicaragua "has never stopped" since mid-2018, when President Daniel Ortega resorted to armed attacks to silence the protests against him (see Fides, 20/8/2018). According to the report, government repression in Nicaragua has resulted in 10,360 incidents since July 4, 2018, including 410 murders, while approximately 3,511 people have been arbitrarily detained, 4,147 have received threats and 2,437 have been attacked.
According to a note from EFE agency, IACHR commissioner and rapporteur for Nicaragua, Antonia Urrejola, described the work of the monitoring group as "fundamental", especially after the delegates of the International Organization, including the special group for Nicaragua (Meseni), were expelled from the Central American country, at the end of 2018 (see Fides, 16/9/2019).
Mgr. Rolando José Alvarez L., Bishop of Matagalpa, commented on Twitter: "A new country must be built, where the dignity of the person, of the family, of freedom, of institutionality, of the supremacy of the law are respected, with officials who do not allow to be corrupted by ambition".
In these days of lay celebrations for the 41st anniversary of the victory over the dictatorship of Anastasio Somoza, on July 19, 1979, President Ortega spoke to the country with the intention of minimizing information on the number of coronavirus epidemic deaths in the country: there are 99, according to the Ministry of Health, while reports from the Citizen Independent Observatory indicate 2,397 deaths.
While Ortega praised the health system's capabilities, ensuring that "through investment in health, we have been able to successfully deal with this pandemic"; the doctors of the Healthcare System have publicly denied it. Dr Francisco Javier Núñez, vice president of Unidad Médica Nicaragüense, (UMN) said that there are more than 100 deaths due to Covid-19 regarding doctors alone. (CE) (Agenzia Fides, 22/7/2020)

ASIA/SOUTH KOREA - President of the Bishops' Conference rejects amendment of the abortion law and calls for the right to conscientious objection: "Abortion is unacceptable"

ASIA/PAKISTAN - Pakistani Christian acquitted after seven years: Justice is now being sought for the violence committed at Joseph Colony

AMERICA/CHILE - Churches destroyed: the Bishops urge us to distance ourselves from irrational violence

AMERICA/CHILE - Churches destroyed: the Bishops urge us to distance ourselves from irrational violence