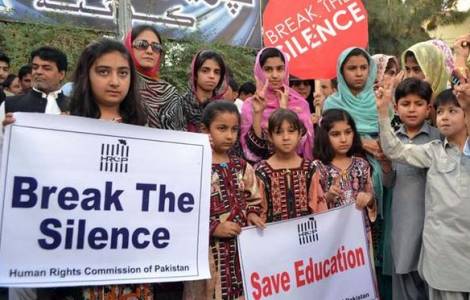 2020-09-09
Christian sentenced to death for "blasphemy"; the Church calls for a government campaign for minority rights

2020-09-03
New priests in Pakistan: hope for the Church in the midst of the pandemic

2020-09-01
Heavy floods in the province of Sindh: Catholic volunteers to help the needy and displaced

2020-08-25
Minority leaders: "Religious intolerance and extremism are growing in Pakistan"

Lahore (Agenzia Fides) - "We ask the government of the Punjab province to review all the measures that are clearly in conflict with the right to freedom of religion, guaranteed by the Constitution of Pakistan pursuant to articles 20 and 25": this is what a group of Pakistani civil society organizations call for, expressing serious concerns about recent developments regarding the education system in the Punjab province.
In a joint statement, the "Commission for the Rights of Minorities of Peoples", the "Center for Social Justice (CSJ), the "Pakistan Minorities Teachers' Association
", the "Cecil and Iris Chaudhry" Foundation, the National Commission "Justice and Peace" (NCJP) of the Catholic Bishops of Pakistani and "Idara-e-Taleem-o-Aagahi" (ITA) deplore the notification to the Governor of the Punjab province that has made Qur'anic education compulsory in the universities of Punjab province (see Fides, 19/6/2020).
Catholic Peter Jacob, president of the "Center for Social Justice" (CSJ) and the "Peoples' Commission for Minorities' Rights" (PMCR), explains: "According to article 20 of the Constitution of Pakistan, every citizen has the right and the freedom to profess, practice and propagate one's religion; Article 25 decrees the equality of every citizen of the country and the right to education, establishing no discrimination on the basis of gender".
The organizations ask for a single national curriculum agreed by federal and provincial governments, "but the government of Punjab has moved to change the teaching of religion in the education system in total contempt for religious freedom for the respect of religious diversity".
"For almost four decades - it is noted - all public schools and most private schools and colleges have taught Islamic studies (Islamiat) as a compulsory subject in all classes", notes Jacob, adding that "the Nazra Quran (recitation of the Koranic text in Arabic) is taught in primary education, while reading the Koran in secondary education classes has been made mandatory in the Province since 2018". Peter Jacob notes that "also in other subjects such as social studies, history and languages there are extensive references only to the majority religion", in clear violation of the Constitution.
A. H. Nayyar, a scholar and member of the working group on inclusive education, speaking with Fides, declares: "The inclusion of religious content has repercussions on the quantity and quality of the educational path. Another disturbing development is an amendment approved by the Provincial Assembly of Punjab, whereby all textbooks must be approved by the Ulema Council, rather than by education experts".
Baela Raza Jamil, a key member of the working group on inclusive education, explains: "These changes to the legislation, promoted without public debate, are deeply worrying and will be socially divisive; they undermine the freedom of learning and critical thinking in the educational system of Pakistan". (AG-PA) (Agenzia Fides, 17/7/2020)

AFRICA/EGYPT - Grand Imam of al Azhar: Islam and Christianity have never been at the root of wars