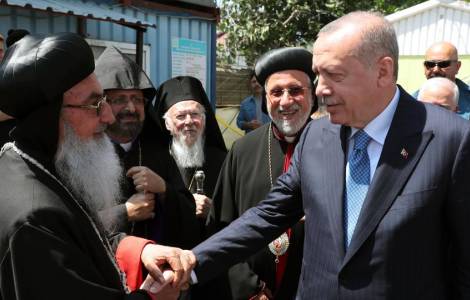 2020-10-02
Conflict in Nagorno-Karabakh, intimidation and fears for Turkish Armenians increase

2020-09-28
"Hate speech" in the Turkish press is rampant. Greeks, Armenians and Syrians targeted

Ankara (Agenzia Fides) - "Our silent revolutions in the field of religious freedom" is the title of the dossier prepared in record time by Turkish President Recep Tayyip Erdogan’s Party as a response to the negative reactions aroused around the world due to the decision to re-open to Islamic worship the ancient Byzantine basilica of Hagia Sophia, transformed in 1934 into a museum at the behest of the "Father" of modern Turkey, Mustafa Kemal Ataturk, after being used as a mosque for almost five centuries.
The memorandum was collected and published by the Human Rights Department of the Justice and Development Party (in Turkish: Adalet ve Kalkınma Partisi - AKP), the conservative Islamist political formation founded by Erdogan in 2001. The dossier collects and exposes all the improvements that according to the AKP, have been registered in Turkey in the real condition of non-Muslim faith communities for the past 18 years, that is, since Erdogan’s Party came to power. Among other things, the dossier, relaunched by the Turkish press, refers to the support offered by government policies to schools and educational institutions headed by Christian minorities and the Jewish community, whose students were exempted from the Islamic religion exam required in order to be admitted to higher study courses.
The report points out that most of the buildings and land that once belonged to ecclesiastical institutions or other religious communities, confiscated by the Turkish State after the end of the Ottoman Empire, were largely returned to the foundations that belong to religious minority communities, and the Armenian community obtained reimbursements for 400 real estate properties available to the State. Moreover over the last three decades different churches have been restored and opened for worship in Turkey, and the management of churches and mosques has been entrusted directly to the foundations that are headed by the various minority religious communities.
At the beginning of 2020, as reported by Fides (see Fides, 3/1/2020), in some statements relaunched by the Turkish press Sahak II Masalyan, the newly elected Armenian Apostolic Patriarch of Constantinople, had said that "All minorities in Turkey agree on the fact that: we are experiencing the most comfortable era during the Justice and Development Party (AK Party) administration, since the founding of the Turkish Republic". In his exaltation of the current condition of minorities in Turkey led by Recep Tayyip Erdogan, the Patriarch mentions the changes made in 2008 in the Foundations law. Sahak II, elected Patriach on 11 December, had also added that "the concept of minorities has been used to interfere in Turkey's internal affairs since the Ottoman Empire", and that his community was pleased about the state's interest and care, noting that they can easily contact President Recep Tayyip Erdoğan, while ministers pay frequent visits and the Prefect of Istanbul always devotes close attention to their concerns". (GV) (Agenzia Fides,15/7/2020)