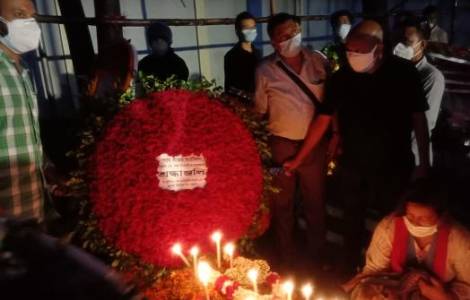 2020-12-29
Radio Veritas in Bengali, a station also listened to by Muslims, celebrates 40 years of proclaiming the Gospel

2020-12-03
Bangladeshi Christians ask for the release of Jesuit Fr. Stan Swamy in India

2020-11-26
The new Archbishop of Dhaka: priority to be given to the family, the “powerhouse” of the Gospel

Chittagong (Agenzia Fides) - "Archbishop Moses Costa was our friend and brother. He was a zealous servant of God. He made a valuable contribution not only to the communities of Dinajpur and Chittagong, but to the whole of Bangladesh": this is what Mgr. Gervas Rozario, Bishop of the Diocese of Rajshahi and Vice President of the Catholic Bishops' Conference of Bangladesh (CBCB), tells Agenzia Fides, remembering Archbishop Moses Costa, who was at the head of the metropolitan archdiocese of Chittagong, who died on 13 July and buried there.
Bishop Gervas Rozario adds: "Archbishop Moses Costa was an announcer and witness of God's love. He brought abundant love of God to the faithful. He loved others without measure, and took nothing for him. He fought hard for justice and to establish peace. He was a living saint. He led his life in a holy way. He lived in suffering in a holy way and his life was like the evangelical grain of wheat, which dying bears fruit". The Bishop says that "we will be able to respect the late Archbishop Costa if we keep and carry forward his ideals and his active faith in our lives".
Sister Renu Maria Palma, religious of the Congregation of Our Lady of the Missions, shares her experience on behalf of the religious with Agenzia Fides and remembers him as a man of profound spirituality: "He was our source of encouragement. He shared the missionary work and, thanks to him, we were strongly motivated to participate in evangelization. We remember his great enthusiasm for missionary work. He was appreciated not only by Christians, but also by Muslims", says Sister Renu Maria Palma, headmistress of Santa Scolastica women's high school.
Father Gordon Dias, Vicar General of the Diocese of Chittagong, on behalf of the diocesan priests, shares his memory of Mgr. Costa and defines him as "a Bishop-catechist": "As we know - he says to Fides - catechists promote and preach the Gospel. Archbishop Moses preached the gospel in remote areas of the archdiocese of Chittagong. He had a profound respect for priestly life. He saved and helped priests in cases of vocational crisis. He also worked to increase vocations to priesthood and religious consecrated life in the local Church".
Bishop Lawrence Subrato Hawlader, Bishop of the diocese of Barisal, says that Archbishop Moses was his point of reference: "When I was in the seminary, he was the rector of the institute. At that time, I wanted to be like him and after becoming a priest, I also became rector of the seminary: his faith and humility were a source of inspiration for me. He was a solid reference in the work and management of pastoral life.
In the administration, he did not hesitate to spend money on the needs of the faithful, while he led his life in an extremely simple manner". "As a leader and spiritual mentor - he continues - he taught and was a credible witness of Christ not only for priests and nuns, but also for many young Catholics. Having been president of the Bishops’ Commission for young people, I have seen hundreds of messages of real appreciation and gratitude towards him, left by young people on Facebook", says Mgr. Lawrence.
The Catholic Michael Rodrick, Bishop Costa’s collaborator, remembers him as a man always dedicated to the development of the people of the community and says: "He was a man of integrity, he knew how to listen, he was a good administrator. We will miss him very much". (FC-PA) (Agenzia Fides, 15/7/2020)

ASIA/PHILIPPINES - The love of the Child Jesus, source of love for the poor in times of pandemic