ASIA/MYANMAR - Appeal to political and religious leaders: seize the opportunity for peace 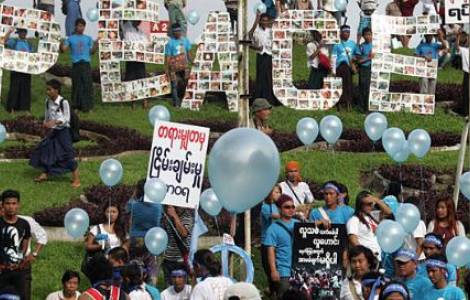 2020-07-21
The fruits of the mission: charity and interreligious coexistence in Kalaw

Yangon (Agenzia Fides) - "In view of important national elections and the 21st century Panglong Conference, we appeal directly to all Myanmar leaders and religious leaders to listen to each other and decide to seek the good of all. A golden opportunity is now given to us in the new conditions and new challenges facing the world. We invite everyone to seize the moment, given the crisis triggered by the coronavirus. This is the message released, on behalf of the Catholic Church in Myanmar, by Archbishop Charles Maug Bo, Archbishop of Yangon, who expresses the desire for peace and reconciliation of the Burmese Catholic community and the entire population.
The message sent to Fides highlights: "We are tired of the war, worn down by enmities. War dishonors everyone. Why does Myanmar's conflict not end? Where is the responsibility? Of course, the belligerence of the army can be accused (Tatmadaw), also its obstinacy in refusing a complete ceasefire to allow the nation to cope with the pandemic. One can deplore the weak authority of the civilian government or the lack of a fair trial in the judicial system. One can accuse leaders of ethnic groups who draw profit from the jade or drug trade. One can deplore the attitude of religious leaders who are too shy to protest against injustice".
The Church recalls that Myanmar is involved in a triple global crisis: the first is that of the coronavirus; the country is also one of the five countries most affected by climate change in this century. Thirdly, the issue of racial relations has returned to the world agenda, very topical in Myanmar, where "people still cling to the madness of assuming a ranking of ethnic differences".
The text asks: "What can we do in order not to return to senseless divisions? What future do we want for our young people? For decades they had no opportunity at home and so they went abroad, often becoming slaves. How can we give health, benefits and dignity to our people? With what courage and creativity can we claim our right to respect, equality, sustainable prosperity and lasting peace for Myanmar?".
The message recalls that many powerful nations close to Myanmar "look at the country's great wealth and natural resources (gold, teak, jade, rivers and pristine forests) with interest and notes that "while we fight each other, our land is devastated, our young people are destroyed by drugs and thousands of young women and men leave the country alone, losing dignity and life". "It is time to stop", hopes the message inviting all political, social leaders and religious "not to be deceived again" and to build a nation where one is not afraid of the difference, but rather learns to negotiate, dialogue and rejoice in what one is".
The appeal then invites us to deepen negotiations, and protect the rights of the poor, to work hard to convince all the players in the field that "peace is also in their interest".
It is urgent to "invest in hope and prepare for the future world after the pandemic". Addressing the leaders, the text urges: "Listen to the cry of Mother Earth. Respect each other. Encourage our young people to study. Our cultures are treasures, built over the centuries. The forests of Myanmar are the lungs of Asia. Our natives know how to preserve them. The rice fields of Myanmar are the rice bowl of Asia. Our farmers deserve only a reward. The young people of Myanmar are responsible for peace in the ASEAN countries (the Association of Southeast Asian nations) in the future. Prepare them to the fullest".
Finally, it is recalled that "Buddhists, Christians and Muslims in Myanmar can live and witness the message that the world yearns to hear, promoting a peaceful, just and inclusive world".
The document concludes: "The people of Myanmar deserve peace, not an endless war. There can be no peace without justice. There can be no justice without truth. Let us allow the birth of a new Myanmar of hope, peace and prosperity as we march towards the goal of democracy through elections. Let us take this opportunity". (PA) (Agenzia Fides, 13/7/2020)