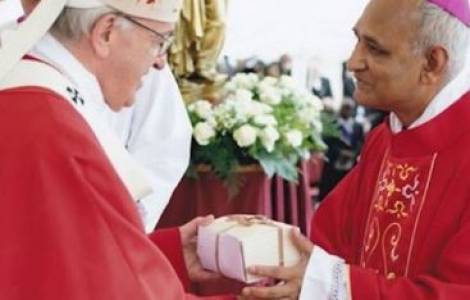 Dhaka (Agenzia Fides) - He contracted Covid-19 and had been hospitalized for a month. Weakened by the infection, Archbishop Moses M. Costa, CSC, 70 years old, Archbishop of the Metropolitan Archdiocese of Chattogram, died today, July 13, at Square Hospital in Dhaka. After hospitalization, Mgr. Costa had improved. But later on, despite testing negative for Covid-19, his situation deteriorated. For the past 48 hours he was in intensive care, where he had a series of strokes caused by cerebral hemorrhage, which proved fatal. The small Catholic community of Bangladesh is deeply affected and saddened by the loss of the Archbishop, who was also Secretary of the Catholic Bishops' Conference of Bangladesh (CBCB).
As Fides learns, Bishop Paul Ponen Kubi, Bishop of Mymensigh, celebrating the funeral mass in Dhaka today, said to the faithful: "Archbishop Moses Costa was an attentive and caring Shepherd. He sincerely took care of his faithful. He was always united with the faithful of the people of God in difficult times, when they were persecuted. He was a leader of profound spirituality".
He continued: "The Archbishop was an eminent figure of the Catholic Church in Bangladesh and a leader highly appreciated also by non-Christians. His loss arouses pain, mourning and sadness in the entire Bangladesh Catholic Church, but also in society, in various educational and social organizations in Bangladesh".
"Archbishop Moses loved young people. He had a special pastoral attention for young people, who in turn loved him very much. He carried out his apostolic service in the Bishops' Commission for Youth and dedicated his time to the human and spiritual growth of young people, accompanying them on their journey of maturity. Many young people found the light of life thanks to his loving human, spiritual and pastoral care. He was a man of prayer, but also a good administrator, a farsighted leader, a reflective writer and speaker, a master of culture. Through his thoughts and his work of human and Christian promotion, and thanks to his enlightened guide, he made an exceptional contribution to many parishes and dioceses. His death is an irreparable loss for the Church in Bangladesh. May the merciful Lord grant him eternal peace".
Mgr. Moses Cosa was ordained a priest in 1981 and elected bishop in 1996. His mortal remains will rest in Chittagong. Bangladesh is the fourth most populous Muslim nation in the world. About 90% of the 160 million inhabitants are Muslims, about 8% Hindus. There are about 600,000 Christians, 400,000 of whom are Catholics. (FC-PA) (Agenzia Fides, 13/7/2020)