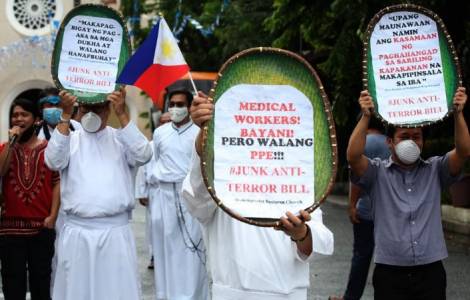 2021-06-15
The International Criminal Court: a complete investigation into the "war on drugs"

2021-05-25
A civic and political education plan: Catholics prepare for next year's general elections

2021-04-22
Food security in times of the pandemic: Catholic congregations set up “community pantries”

Manila (Agenzia Fides) - "In light of faith, we cannot conscientiously adhere to a law that can attack human dignity and human rights. At a time when our people are battling the effects of Covid-19, we find no reason to pass a law that does not serve to alleviate their miserable plight. Unemployment, the closure of businesses, the continuing spread of the virus, and the lack of relief for our people are the most pressing concerns at this time. We welcome the initiative of lawyers, religious and other civil leaders, to present an urgent petition to the Supreme Court": this is what is expressed in a statement sent to Fides by the Association of Major Religious Superiors in the Philippines, which brings together the heads of men and women religious orders in the nation. The religious, who in recent weeks had joined those who expressed concern and opposition to the law, considering it "draconian and unconstitutional", say they are "deeply saddened by the signing of the anti-terrorism law" which, approved by Parliament and signed by President Duterte, will officially enter into force on July 18.
The press release, co-signed by Fr. Cielito R. Almazan, OFM, and Sr. Marilyn A. Java, RC highlights: "We pray that the Supreme Court will approve a temporary suspension order. We trust that the women and men of the Highest Court in the country will be guided by the common good of all and by the Philippine Constitution. We implore them that the light of rule of law and of justice shine ever bright". The text continues: "We ask all women and men of good will and all those who care about our rights and freedoms: defend and be close to the poor and oppressed. Truth, justice and peace will prevail".
The religious, quoting a biblical passage from the second Letter to the Corinthians (2 Cor 4,8) say they are "afflicted in every way, but not constrained; perplexed, but not driven to despair; persecuted, but not abandoned; struck down, but not destroyed".
Large sectors of the Catholic Church in the Philippines share and publicly expressed their disappointment before the law. Archbishop Socrates Villegas, at the head of the diocese of Lingayen-Dagupan, said he "deeply regrets" President Rodrigo Duterte's decision to sign the bill stating: "It is morally wrong to leave the terms of application of a bill so powerful to the interpretation of the reckless and powerful". The Church is certainly against terrorism, he explained, "however, we do not want to deal with violence and blind anger with even greater violence or legitimizing terror", he said. "We would rather engage in the difficult but necessary task of building a culture that listens, that does not neglect, that welcomes differences. This culture of inclusive listening will soon strip the extremists of all reasons. Peace is the only way to peace", he added.
Even Mgr. Ruperto Santos, Bishop of Balanga, found that "the new law threatens freedom of speech, will not bring peace, harmony nor unite us", urging to monitor the actions of the government, to denounce any form of violation of human rights, repression of the state and impunity. (PA) (Agenzia Fides, 7/7/2020)

ASIA/INDIA - Indian Church remembers the sacrifice of priests and nuns who died from Covid-19, in the work of assistance and care

AMERICA/PERU - Recognition of the martyrdom of "Aguchita": religious missionary among the indigenous Ashaninka people

AMERICA/EL SALVADOR - The law on the right to water reaches Parliament, "people's lives are at stake" warns Cardinal Rosa Chavez

AFRICA/BURKINA FASO - The Bishops: "We offer our condolences for the victims of the Solhan massacre"

AMERICA/PERU - Elections: waiting for results; the Church invites us to be united and be responsible

AMERICA/EL SALVADOR - The law on the right to water reaches Parliament, "people's lives are at stake" warns Cardinal Rosa Chavez

ASIA/MYANMAR - Burmese in diaspora around the world: strike in support of Aung San Suu Kyi

ASIA/INDIA - In the midst of the pandemic, violence against Christians does not stop

ASIA/SOUTH KOREA - Cardinal Yeom: Bishop You to the Congregation of the Clergy is "a great gift"

AMERICA/PARAGUAY - Novena to invoke the end of the pandemic and the beatification of Bishop Shaw, great missionary of Chaco