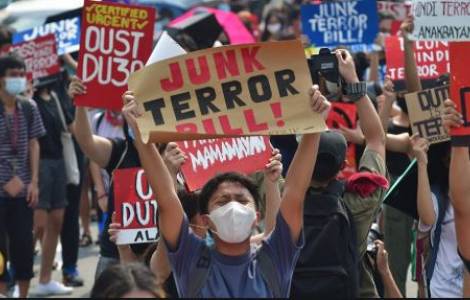 2021-06-15
The International Criminal Court: a complete investigation into the "war on drugs"

2021-05-25
A civic and political education plan: Catholics prepare for next year's general elections

2021-04-22
Food security in times of the pandemic: Catholic congregations set up “community pantries”

Manila (Agenzia Fides) - "The Philippines are facing the Covid-19 crisis but, despite the urgency of the situation, the administration of President Rodrigo Duterte is committed to consolidating power. At the moment there is no concrete plan to stop the Coronavirus spread, however, President Duterte signed the draconian anti-terrorism law": this is what is stressed in a statement, sent to Agenzia Fides, from the "First Union" network that brings together organizations and leaders of religious communities, lawyers, union representatives, humanitarian groups, NGOs, associations.
The legislation, signed on July 3 by the President, after Parliament's approval, will officially enter into force 15 days after the President's signature. The text gives unprecedented powers to the executive. A new body called the Anti-Terrorism Council - made up of senior cabinets and military officials - will have the power to order the arrest, freezing of assets or surveillance of individuals and organizations suspected of being terrorists. "The fact that members of the executive exercise powers that only the judiciary should have, makes a mockery of the separation of powers under the Philippine Constitution", the statement said.
"Even more frighteningly - notes the First Union network - paves the way for authoritarianism on a large scale, allowing the president and the government to get rid of their political rivals and other dissidents. The broad definition of terrorism includes incitement to terroristic activities through speeches, writings and banners. Duterte’s administration has often referred to opposition politicians, political activists, trade unionists and human rights lawyers as 'terrorists' or 'communists' - equating activism and dissent with political violence, aimed at overthrowing the government. This legislation also allows the authorities to arrest suspected terrorists without a warrant and to detain them for 14 days, extendable to 24 days, without proven accusations".
The network strongly condemns the enactment of the anti-terrorism law, inviting Filipinos throughout the country and the rest of the world to join us to protest this attempt by "dictatorship introduced by the service door" in the Philippines by President Duterte.
The network of Christian bodies called "Church People-Workers Solidarity" (CWS) also agrees with these positions, asking that the anti-terrorism law be immediately abolished, and affirming that it "will further endanger the human rights of the Filipino people".
"Legitimate protests, strikes and other forms of collective action by workers who only ask for wages, job security, health, can be labeled as a terrorist act under the aforementioned law", notes the CWS network
"Therefore, the anti-terrorism law will increase the repression of the basic democratic rights of workers, and of every citizen, to freedom of speech, expression and assembly", reads the note sent to Fides. The network notes that already some existing laws have been used to attack workers' rights, in a peaceful assembly, despite the legality and constitutionality of the aforementioned protest actions.
CWS reiterates that, at this difficult time amid the Covid-19 pandemic, "the government should prioritize people's basic and urgent needs and not a law that represses legitimate human rights and civil liberties".
Meanwhile, the first appeals have been filed at the Supreme Court against the anti-terrorism law. Various groups of lawyers, associations and NGOs have announced appeals which, on the one hand, ask for the immediate suspension of the effects of the law, until full constitutionality is recognized; on the other, petitions ask for its total revocation, declaring it unconstitutional. (PA) (Agenzia Fides, 6/7/2020)

AMERICA/MEXICO - The Bishops: "Today more than ever, our societies need peacemakers"

AFRICA/D.R. CONGO - Let us strengthen national unity by fighting against the negative values that threaten it", exhort the Bishops

AFRICA/KENYA - The alleged murderer of Fr. Michael Maingi Kyengo, killed in 2019, has been arrested

AMERICA/HONDURAS - The Bishop of La Ceiba on the Zedes: "let's defend the common good, let's defend territorial sovereignty and our values"