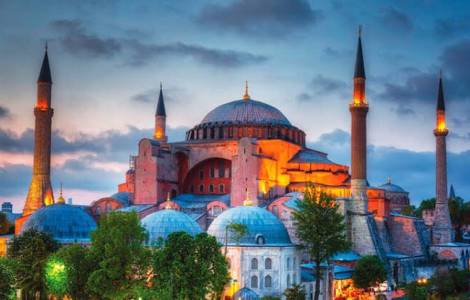 2020-07-15
Ayasofya, Erdogan’s Party responds to criticism: religious freedom has increased with our governments

2020-07-13
Churches and ecumenical bodies in the Middle East: the "reconversion" of Ayasofya is a sabotage of the new paths of brotherhood between Christians and Muslims

2020-07-01
Ecumenical Patriarch Bartholomew: the conversion of Hagia Sophia into a mosque will sow discord between Christians and Muslims

2020-06-30
Bishop Bizzeti's proposal: to dedicate a road in Iskenderun to Luigi Padovese

Istanbul (Agenzia Fides) - The current status of Ayasofya as a museum complex not used for religious worship fully corresponds to the current legal framework, founded on the decision of 1934 with which the Turkish government at the time turned the ancient Christian basilica into a museum which was used as a mosque. To change this state of affairs, a presidential decree is sufficient to declare the provisions on Ayasofya in force for less than 86 years has expired. This is a summary of the sense of the expected pronouncement, on Thursday 2 July, by the Turkish Council of State on the possibility - strongly sponsored by political sectors today dominant in Turkey - to reuse Ayasofya as an Islamic place of worship. The session of the Council of State called to express itself on this delicate and thorny affair with a strong geopolitical impact - local sources report to Agenzia Fides - lasted less than half an hour, and seems to leave in fact in the hands of President Recep Tayyip Erdogan the responsibility to change the current status quo, converting Ayasofya back to a mosque. The members of the Council of State, in their brief session, confirmed the persisting validity of the previous pronouncement with which the same body had already rejected the appealpresented in 2004 by the so-called "Turkish Union of Historical Monuments" to ask to open Ayasofya to gatherings of Muslim prayers. At the same time, the Council of State acknowledged that a direct intervention by Erdogan on the controversial issue, through an ad hoc presidential decree, can change the current state of affairs and legitimize the reuse of Ayasofya as an Islamic place of worship. It will take at least fifteen days for the publication of the pronouncement of the Turkish Council of State and its reasons.
The Byzantine basilica of Hagia Sophia was transformed into a mosque after the fall of Constantinople, and then became a museum in 1935, at the behest of Mustafa Kemal Atatürk, first Turkish President and founder of modern Turkey. In recent years, at the end of May, gatherings of thousands of people had filled the vast square outside the site to celebrate the anniversary of the Ottoman conquest of the city and request its reopening as a mosque. The authoritative intervention of the Turkish Council of State was expected as a useful signal for deciphering whether in the near future the pressures put in place by these Turkish political and social sectors, which in recent times seem to have found increasing attention and support, also on behalf of Erdogan. According to reconstructions also reported by Agenzia Fides (see Fides, 6/6/2020), the Turkish President himself has apparently given instructions to change the status of the monumental complex of Ayasofya, so that it can also be used again as an Islamic place of worship. The whole issue also takes on obvious geopolitical connotations: on Wednesday 1 July, according to news from numerous international agencies, the US Secretary of State Mike Pompeo allegedly asked Erdogan not to transform Ayasofya into a mosque, so as not to compromise the historical value of the monument. On June 30, during the homily of the divine liturgy dedicated to the Holy Apostles (see Fides, 1/7/2020), Bartholomew I, Ecumenical Patriarch of Constantinople, stressed with alarmed tones that the possible conversion of the monumental complex of Ayasofya into a mosque in Istanbul "will push millions of Christians around the world against Islam". (GV) (Agenzia Fides, 2/7/2020)

ASIA/TURKEY - "Egyptian Fatwa" against those who want to re-transform Ayasofya in Mosque. The pronouncement of the Council of State is awaited

ASIA/INDONESIA - The Director of the Pontifical Mission Societies: "Democracy is solid, the future is civil coexistence"