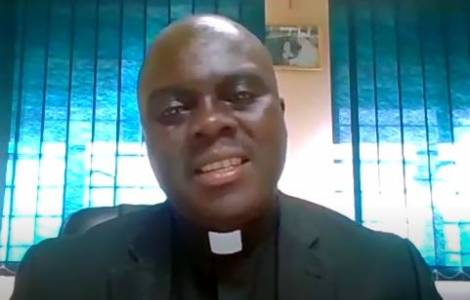 2020-10-29
Jesuit study center: "We are worried about the rapid deterioration of the economy"

Lusaka (Agenzia Fides) - "Although the emergency of Covid-19 this year prevented us from meeting the Holy Father in person in the annual General Assembly dedicated to the Pontifical Mission Societies, it was equally very emotional and touching to receive his message. We felt his presence and closeness very strongly". This was reported by Father Edwin Mulandu, National Director of the Pontifical Mission Societies (PMS) in Zambia, in a conversation with Agenzia Fides, commenting on the Message that Pope Francis sent to the PMS on May 21, solemnity of the Ascension of the Lord. Agenzia Fides asked him some questions.

What are the points of the Message that most affected you?
"The Holy Father's message is very elaborate and underlines many points on the fundamental dimensions of our charism as Pontifical Mission Societies, which are Service to the Church and to the Supreme Pontiff; our missionary identity; prayer and charity as a simple method of participation in the mission. In particular, I was very touched when the Pope spoke of preserving and recovering the role of the PMS: even in past years, the Pope repeatedly informed us of the risk of transforming the PMS into a non-governmental organization (NGO). This applies in cases where all our efforts are devoted to raising and distributing funds. Sometimes we risk using professional fundraising methods which are used by NGOs and which are not compatible with the PMS charisma. Every kind of work we do must be placed in the hands of the Lord. I also consider very important the fact that the Pope in his message emphasizes the need to pay attention to the basic needs of the communities, while avoiding a culture of well-being, which instead of assisting missionary zeal ends up making hearts lukewarm and nourishing the phenomena of addiction".

How can the Pope's Message help to renew the PMS mission in Zambia?
"It is essential to start other animation and missionary formation programs in favor of the faithful so that they can learn more about the Pontifical Mission Societies. In our context, for example, the PMS are perceived as a "funding agency" by many people, because they are mainly associated with projects. The PMS director is identified more as a "project manager", as a priest in charge of projects. The challenge is therefore to enter more concretely into people's daily lives, to involve parish priests, religious, faithful and lay people in the missionary activities of the PMS. Another crucial point of the mission in Zambia is that represented by poverty. It is necessary to concentrate efforts so that large parishes in large cities can offer greater support for poor parishes in villages, and encourage the spirit of sharing among the faithful: sometimes, there is a tendency to receive without doing anything. This attitude must be avoided. We need to form a mentality that is more projected towards exchange and donation. Prayers for those involved in actual missionary activities should also be encouraged by all the faithful as a way of collaboration and involvement in missionary work".

How do you see the future of the PMS in the Church of your country and universally? In which direction should we proceed?
"When I reflect on the future of the PMS, I consider it important to look at the past and the present. What we need to do is dedicate more resources and time to formation. The charism of the founders of the Pontifical Mission Societies should play a central role in our missionary formation. Prayer and charity should always go together in Missionary Animation. Missionary animation groups and those that promote fundraising should pay close attention to Prayer and Formation. I also think that the Missionary Childhood Society is a source of great hope both for the future in Zambia and in the rest of the world. Their missionary formation is complete. Children are educated both in prayer and in material sacrifice according to the motto "Children helping children", which well summarizes the charism of the Society. We have great hope that these children, after their formation, will become very devoted missionary animators not only of the Holy Childhood Society, but of the entire Pontifical Missionary Society. As Pope Francis wrote in his message quoting St. Ignatius of Loyola, "all we have to do is think of doing our job well, as if everything depended on us, even though we know that everything really depends on God". (ES-PA) (Agenzia Fides, 27/6/2020)

ASIA/PHILIPPINES - The Bible in every home and workplace: the Church's commitment in times of suffering

ASIA/PHILIPPINES - In times of pandemic, "preaching and bearing witness to the Gospel are particularly important"

ASIA/INDIA - The Jesuits in Goa: "In the footsteps of St. Francis Xavier, we remain alongside the poor and those who suffer"