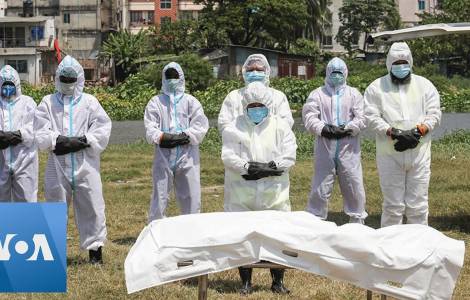 Vatican City (Agenzia Fides) - Since the beginning of the Covid-19 pandemic, the diocese of Barishal in Bangladesh, which includes 11 civil districts, has worked to help the population to stop the infection, both through its dispensaries, with the help of doctors who offered services and medicines. The poor are the ones who suffer most from the consequences of isolation: most of the population in fact lives by day jobs. Even small farmers cannot transport their products and sell them for minimal livelihood. Since schools are closed, teachers and school staff have not received wages for months, also putting their families in financial crisis. The diocese is trying to help as many as it can, by providing food aid also to indigenous peoples, who are discriminated against in the distribution of state aid but who in turn need urgent help.
The diocese of Barishal is one of the numerous dioceses in the world to which the Emergency Fund established by Pope Francis at the Pontifical Mission Societies (POM) has sent aid to support the churches of mission countries in the face of the Covid-19 emergency (see Fides, 6/4/2020).
Always in Bangladesh, in response to requests received from the Bishops, the Fund was also able to help several other ecclesiastical circumscriptions which we mention below. Most of the territories entrusted to the Missionary Dicastery present extremely precarious economic, social and health situations, which the Covid-19 pandemic is further exacerbating, thus hampering the work of evangelization and human promotion.
Bangladesh is fully implementing missionary cooperation among the Churches. In fact, the PMS National Director, Fr. Rodon Hadima, organized the fundraising in the country to contribute to the Covid Fund established by the Pope at the PMS and has already sent two contributions. Therefore, while the dioceses of Bangladesh are asking for help to deal with the situation, at the same time the Catholics in Bangladesh shared what they have and thus contributed to the support of the other Churches in the rest of the world.
The majority of the faithful of the diocese of Rajshahi, in Bangladesh, are made up of tribal Adivasis, illiterate, poor and marginalized. Most work day by day in the land of landowners, and when they do not work, the whole family has no food. With the closure of schools, teachers have also been unemployed for months, as they have no state subsidies. The diocese is trying to alleviate the difficulties of all these families, but also the diocese itself is poor and its financial resources are very limited.
In the diocese of Mymensingh the Covid situation is quite serious, at least a thousand people have been found positive, but the figure is underestimated. The majority of the population is indigenous, almost all of them earn their living with small, occasional jobs that they can no longer work due to confinement. Lack of food for them and their families exposes them to disease and despair.
Even in the diocese of Sylhet people are very poor and simple, they do not understand the seriousness of the situation caused by the virus. The Church is committed to education and health, serving the poor and handicapped, for the respect of their rights. Following isolation, there is a serious lack of food, from which the elderly and children suffer the most, including street children assisted by the Church, who are now truly hungry. A similar situation is recorded in the diocese of Khulna, where most Christians are poor and socially excluded. The Church is engaged in the distribution of food to alleviate the situation of many families who have no other aid.
The Archdiocese of Chattogram extends over a very large territory, where most of the population is poor. The severe lack of priests and pastoral workers has always been an obstacle to evangelization. Missionaries manage to visit communities not more than once a year. Faith is nourished and kept alive thanks to the work of the catechists and the animators of prayer, who are prepared to animate catechism meetings, follow the catechumens and guide the spiritual moments, managing to frequently visit the communities. Financial support is particularly necessary for them right now so that they can purchase sanitary protection material from Covid-19. (SL) (Agenzia Fides, 25/6/2020)

AMERICA/PANAMA - Mgr. Ulloa on the pandemic: "sensitivity, unity, solidarity and generosity must prevail"