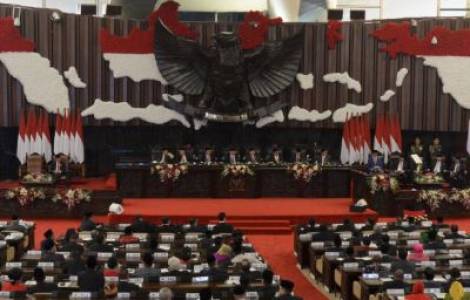 Yoyakarta (Agenzia Fides) - "I think that any effort to strengthen Pancasila and to promote the ideology of the State must be supported. But, in light of the current public reactions from parts of society, I fear that any transformation of the current proposal into law would cause friction within Indonesia. External inputs and repercussions must be considered before further elaboration or possible promulgation of the law". This is how Jesuit Father Baskara T. Waraya, professor of history at Sanata Dharma University, Catholic university of Yogyakarta, comments to Agenzia Fides the legislative project that in recent days has been at the center of a lively debate, raised by a bill that aims to regulate the values of the Pancasila ideology and the functions of the Control Agency (BPIP), chaired by former president Megawati Sukarnoputri.
Now Pancasila, the "charter of five principles" at the base of the nation (right to one’s faith, just and civil humanity, unity of the Country, democracy and social justice), should be subject to a reform which, in transforming it into State law, aims to strengthen it. Some sectors of the Muslim world have contested it, arguing that the bill flattens the role of religion and that the absence of the famous 1966 decree - which banned the Communist Party - would be "an open door to communism". Proponents instead say that the law would put small extremist groups - right or left, religious or secular - in difficulty, which oppose the development of democracy in Indonesia. At the same time, human rights protection organizations have also expressed reservations: they fear a tightening on freedom of expression. In the end, the debate in Parliament fell through and for the time being the project has been frozen. "I believe - comments Fr. Baskara - that there was no adequate study and discussion in Parliament on the project, nor sufficient public debate, except perhaps in some circles, and perhaps also because of the coronavirus. Precisely because of the pandemic, the moment was not carefully chosen because both the government and the people are now concerned above all about the economic and social impact of the virus".
Pancasila, the "charter of five principles", the philosophical and ideological basis of Indonesia, was celebrated all over the country on June 1st by all political and religious realities. At Sanata Dharma, the only Jesuit university among Catholic universities, an artistic performance, which lasted over an hour and a half was filmed (given the restrictions of Covid-19) and posted on Youtube where it had over 53 thousand views. It is one of the many signs that the Indonesian Catholic world gave in the historical anniversary of the birth of Pancasila in 1945: Father Gregorius Subanar, another Jesuit who teaches "Culture and Religion", recalls that Sanata Dharma, "born in 1955 - ten years after independence - was visited by Sukarno, the creator of Pancasila, in 1961, on the eve of the Second Vatican Council". (MG-PA) (Agenzia Fides, 25/6/2020)