ASIA/INDIA - A Jesuit: "The life of refugees matters: No to exclusivism and false nationalism" 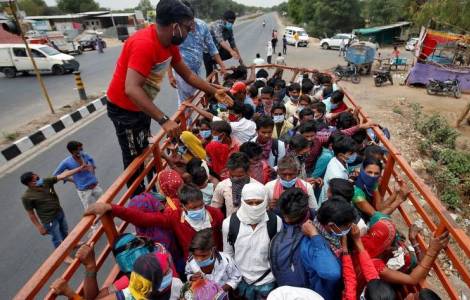 2020-07-22
The Sisters of Bethany: one hundred houses for the poor on the centenary of the congregation

Ahmedabad (Agenzia Fides) - "In India, a particularly significant issue is that related to the reception and living conditions of refugees: in recent months the spotlight in the country has been on internally displaced persons and stateless persons, as well as on refugees. The Citizenship Amendment Act (CAA), passed by both Houses of Parliament in early December 2019, is patently unconstitutional and patently discriminatory against them. It has received widespread criticism and protests. According to the United Nations Human Rights Council, the law seems to undermine the commitment to equality before the law sanctioned by the Indian Constitution": says to Agenzia Fides Fr. Cedric PRakash, Indian Jesuit and human rights activist, who was given the special award by the Commission for Minorities, in the government of Delhi, for his commitment to promoting human rights social integration.
The Jesuit notes that "the Convention for the Elimination of Racial Discrimination, of which India is a signatory State, prohibits discrimination based on racial, ethnic or religious reasons", while the law has a discriminatory effect, selecting them according to their religion. "This is why we call for the immediate revocation of the CAA, which could make a large number of people already present in our country stateless".
Fr. Prakash states: "The pandemic has led to focusing on the plight of internally displaced people, especially migrant workers. Since the announcement of the lockdown, an unprecedented humanitarian crisis in modern Indian history has seriously disrupted the lives of migrant workers of India. Millions of migrants have found themselves stranded, without food, money and shelter, trying to return home. They have been subjected to violations of their fundamental rights and often to serious abuses on behalf of the police at interstate borders. Many have died as a result of the lockdown, or exhausted due to their journey home, from hunger, or from suicide because of police violence, illness or rail and road accidents".
Meanwhile, the activist notes, "the current strategy of the authorities, in response to this phenomenon, has been inadequate and only 30% of workers have been able to use the special trains set up for them. At the moment, the Indian government does not have an estimate of the total number of people stranded or on their way home, across the country. The Supreme Court issued a provisional order concerning the transport of migrants".
Fr. Prakash adds: "The way India treated the small group of Rohingya who sought refuge in India in the wake of their persecution in Myanmar, is a textbook case of how we have become inhospitable as a nation. Today xenophobia, fake nationalism and exclusivism seem to have become the order of the day. This is clear especially when looking at how minorities, Adivasis, Dalits, the poor and vulnerable people like migrant workers are treated in the country today".
Fr. Prakash recalls the reflections expressed several times by Pope Francis, and notes: "Responding to the difficult situation of refugees and other IDPs, in the midst of the pandemic, is certainly a great challenge. One will not obtain much if the governments give up their role to respond to the cries of these peoples. We must show courage and political transparency to ensure that the last of our brothers and sisters are welcomed, protected, promoted and integrated. In the final analysis, we can say: the life of refugees matters". (PA) (Agenzia Fides, 23/6/2020)

ASIA/IRAQ - Chaldean patriarchate: the expulsion of Iraqis carried out by the USA is "Inhuman and immoral"