AMERICA/BRAZIL - "Humanitarian catastrophe" in Brazil for the pandemic: complaint by the Venezuelan ambassador to the UN 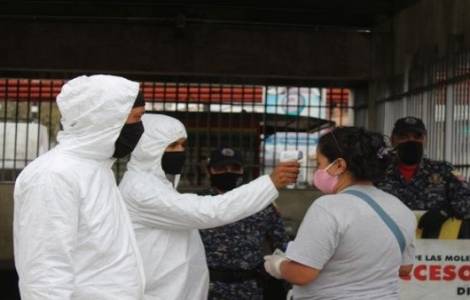 Caracas (Agenzia Fides) - Tension between Brazil and Venezuela grows after last Tuesday, June 16, the Venezuelan Ambassador to the United Nations (UN), Samuel Moncada, denounced the government of Jair Bolsonaro "for criminal negligence in the face of pandemic that endangers the lives of millions of inhabitants in Brazil and across the continent".
In a letter to the United Nations Secretary General, António Guterres, Ambassador Moncada said: "Bolsonaro intentionally has turned Brazil into a humanitarian catastrophe with over 20 percent of contagions on the continent and over 10 percent in the world. It is the second country with the most victims after the United States".
The diplomat added that Brazil's two border states, Amazonas and Roraima, have more than 62,000 Covid-19 cases, while all of Venezuela has 3,062 cases. "Bolsonaro's contempt for the life of his people is a threat to the Venezuelans on the border and to more than nine countries in the region", he stressed.
The denunciation coincides with the request of the Indigenous Missionary Council (CIMI) which raised the alarm on the serious situation experienced by the native populations in Brazil. CIMI has released the data collected by the Association of Indigenous Peoples of Brazil (APIB) which are truly alarming: more than 5 thousand cases with about 300 deaths among the indigenous people.
The tragedy could have been even greater if the indigenous communities had not closed their territories at the beginning of the pandemic. However, CIMI states that "the contagion has spread to Manaus and continues to spread in the regions of Alto y Medio Solimões, Vale do Javari, Rio Negro, in the state of Amazonia", as well as in the states of Roraima, Mato Grosso, Mato Grosso do Sul, Pará, Maranhão, Ceará, Pernambuco and on the southern coast of Brazil. "In all these regions, the virus is already present in villages", he warns.
Faced with the facts, CIMI members express their perplexity at the "positions of ignorance and lack of commitment of the federal government authorities, which manifest themselves in an unbridled way", to which must be added the hatred of President Jair Bolsonaro and of the Ministers of Education and the Environment, against indigenous peoples. (CE) (Agenzia Fides, 19/06/2020)

AMERICA/PANAMA - Mgr. Ulloa on the pandemic: "sensitivity, unity, solidarity and generosity must prevail"