ASIA - Pandemic and children's rights: thousands of children pushed onto the labor market 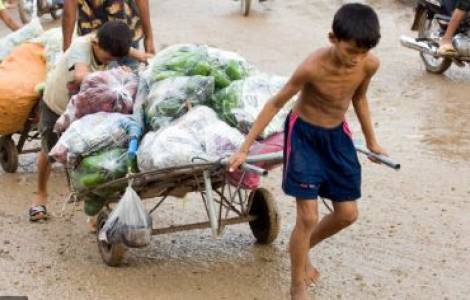 2020-09-07
Covid-19 and educational emergency: collaboration between governments and the private sector is urgently needed to support families

2020-07-18
Abuses of human rights, xenophobia and religious intolerance in Asia: the denunciation of "Franciscan International"

2020-07-11
Environmental disasters and the Church's commitment: the path of safeguarding creation in Central Asia

Bangkok (Agenzia Fides) - "Children have the right to be protected from all forms of discrimination, exploitation and violence. The impact of Covid-19 containment measures in various Asian countries, the closure of schools and the increase in stress on families cannot and must not be transformed into exploitation, abuse and violence against children. Supporting and promoting children's dignity and rights must be a priority for governments, civil society organizations, churches and all religious communities. Children must be at the center of the response to the health, economic and social emergency": this is what was reported by children's rights activists and leaders of the Asian Churches, who took part in a virtual conference, followed by Agenzia Fides, organized by the "Christian Conference of Asia" (CCA) on the theme "Supporting the dignity and rights of children in the midst of the Covid-19 crisis". CCA Secretary General Mathews George Chunakara stressed that "the needs of children in the midst of the pandemic have been invisible". "The impact of the coronavirus - he remarked - could permanently damage the well-being of future generations. Therefore, their rights must be asserted, guaranteeing the well-being and dignity of childhood: the quality of life is a right for all children".
Millions of children in Asia risk being pushed onto the labor market: the crisis triggered by Covid-19 could lead to "the first increase in child labor after 20 years of progress", reported the International Labor Organization and Unicef on the occasion of the "World Day against Child Labor" (12 June), and in view of 2021, declared by the UN "International Year for the Elimination of Child Labor". Taking stock of a practice that has declined since 2000 to today, but could now return, the report released by the two organizations highlights the worsening of childhood conditions in Asia, with significant damage to health and safety. The East Asia and Pacific region is home to 70% of people affected by disasters globally: in addition to the risks associated with the pandemic, populations are exposed to climate change, urbanization, migration, phenomena that are aggravating existing vulnerabilities. Children are the first victims.
In Southeast Asia, ASEAN (a regional Association that brings together 10 countries in the area) has discussed the promotion and protection of women's and children's rights, especially for domestic violence during the pandemic. Social and institutional awareness of these issues is growing in several Asian countries: the number of calls to the Vietnamese Women's Union's special telephone line on behalf of women who suffered domestic violence during the lockdown has increased by 50% and that of victims rescued or taken into custody marks an increase of 80%. As for the impact of the pandemic on children, a survey by the Vietnamese Association for the Protection of the Rights of the Child revealed that 48% reported being subjected to verbal abuse, while 8% were beaten and 32.5% said they did not receive adequate family care.
If being informed is the first step and the existence of protective structures is certainly the second, the pillar on which they stand is still a law that allows to protect children's rights. From this point of view, Myanmar - where it is estimated that child labor involves almost 10% of the population between 5 and 17 years of age - has signed the Convention on the minimum working age proposed by the International Labor Organization, which imposes to establish both age and national policies for the abolition of child labor. The convention was ratified by the Burmese parliament on June 8. (MG-PA) (Agenzia Fides, 16/6/2020)

AFRICA/UGANDA - Missionary Childhood Day: children can be saints even with the little means they have

AMERICA/BRAZIL - "Covid-19: now more than ever, urgent need to protect children and adolescents from child labor"