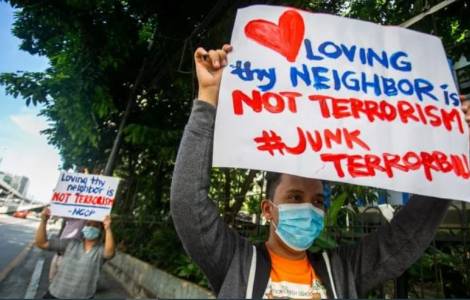 2020-07-20
Priests and religious: "It is time to resist against a dangerous and unjust law"

2020-07-09
Churches reopen after lockdown; the Church activates a psychological and spiritual counseling program

Manila (Agenzia Fides) - A large part of civil society in the Philippines has launched a campaign to oppose the controversial new Anti-Terrorism Law approved in Parliament. Human rights activists, Catholic leaders, lawyers, academics, priests and religious raised a lively debate, while the Philippine Congress approved the 2020 anti-terrorism law yesterday, 3 June. A total of 173 legislators voted in the affirmative, with 31 members opposing and 29 abstaining. It now needs only the signature of President Rodrigo Duterte to become law, a seeming formality since his government was the promoter.
Before Congress voted on the new measure, President Duterte said that "the bill was urgent because it had to contain the menace of terrorists acts for the preservation of national security and the promotion of general welfare".
According to activists, "the new law makes an excessively broad and amorphous use of the terms" terrorism of a terrorist act", which could be used to silence any dissent towards the government and drastically reduce human rights and civil liberties, repress political opponents.
Under the new law, a citizen can be arrested without a judicial warrant and undergo a 14-day detention order, on the order of a new body established by the same law, the "Anti-Terrorism Council", even in the absence of the formal charge of a court. Surveillance, wiretapping and the invasion of the privacy of any individual is allowed on the mere suspicion of being an alleged terrorist, even without any evidence of wrongdoing.
The measure also revokes financial penalties for those who order an unjustified arrest and remove other existing guarantees against abuse by police officers, "thus increasing the probability of serious impunity for misconduct by state forces", says to the Fides Fr. Daniel Pilario, priest and theologian from Manila.
Lawyer Mel Santa Maria, Dean of the Far Eastern University Institute of Law, said "the bill will be a deadly sword in the hand of any despot". Jose Manuel Diokno, Dean of the Faculty of Law at the University of La Salle run by the Brothers of the Christian Schools said: "According to the law, people can be arrested simply by order of the Council. This mechanism is similar to the acts carried out during the era of dictator Ferdinando Marcos".
In a public statement sent to Fides, several Christian leaders, concerned about the erosion of human rights, note that "the new law could be abused by those who wish to dominate the people, canceling the opposition and also suppressing legitimate dissent. This plan of law will cause a further narrowing of the democratic space and a weakening of the public debate which will be harmful to our nation". Christian leaders believe the new bill is unnecessary because existing laws are already effective enough to combat crime and terrorism. "Our poor are already burdened with poverty and suffering of all kinds. They need positive laws to help them live in dignity and peace", they add.
Signatories of the note include Bishop Broderick Pabillo, Apostolic Administrator of Manila, Bishop Gerardo Alminaza of San Carlos, Bishop Reuel Norman Marigza of the National Council of Churches in the Philippines and Bishop Rhee Timbang of the Philippine Independent Church. (SD-PA) (Agenzia Fides, 4/6/2020)