EUROPE/FRANCE - Mgr. De Brésillac and Pauline Jaricot: protagonists of the extraordinary season of missionary commitment of the 19th century 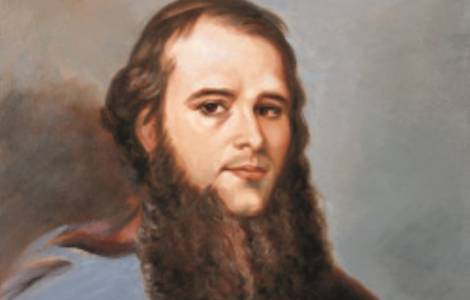 2020-10-12
Towards Mission Sunday - the Superior of the MEP: Pauline Jaricot and Therese of Lisieux, examples of missionary life

2020-07-27
In the memory of Father Hamel, the rejection of all violence and respect for human life

2020-06-03
A PMS website to get to know Pauline Jaricot, who invented "the first missionary social network"

2020-06-01
Mgr. De Brésillac and Pauline Jaricot: protagonists of the extraordinary season of missionary commitment of the 19th century

Rome (Agenzia Fides) - Among the decrees that the Holy Father authorized to publish on May 26, in addition to the recognition of the miracle attributed to the intercession of the Venerable Servant of God Pauline Marie Jaricot (see Fides, 27/5/2020), there is also the one concerning another important figure in the missionary world: the Servant of God Melchiorre Maria de Marion Brésillac, whose heroic virtues were recognized, who was titular Bishop of Prusa, formerly Apostolic Vicar of Coimbatore, Apostolic Vicar of Sierra Leone, Founder of the Society of African Missions (SMA), of which 150 years of activity have been celebrated (see Fides 7/12/2006). He was born on December 2, 1813 in Castelnaudary, France, and died in Freetown in Sierra Leone on June 25, 1859.
"It is a happy coincidence that combines the recognition of the heroic virtues of Mgr. De Brésillac with the recognition of a miracle due to the intercession of Venerable Pauline Jaricot, born a few years before him and foundress of the Society of the Propagation of the Faith", comments to Agenzia Fides Fr. Antonio Porcellato, Superior General of the Society of African Missions (SMA). "They are both linked to the city of Lyon - he continues - she was a committed lay woman, dedicated to prayer and supporting the financial help to missionaries, he founder of a missionary society which started in that city, both protagonists of the extraordinary season of missionary commitment in the 19th century".
As Fr. Porcellato recalls "the two knew each other: Brésillac was financially supported by the Society founded by Pauline Jaricot both as Apostolic Vicar of Coimbatore in India, and as Apostolic Vicar of Sierra Leone and as Founder of SMA. It was the era of the 'Foreign Missions', now the context has changed radically, but from this very strong collaboration between the faithful in Europe and missionaries abroad what strongly emerges is that the missionary dimension belongs to the whole Christian people. We are all disciples and missionaries as Pope Francis wrote in Evangelii Gaudium, and as we recalled in the recent Extraordinary Missionary Month of October 2019".
On the meaning that this recognition of the Congregation for the Causes of Saints, approved by the Holy Father, could have for the missionaries of the SMA and, in general, for the missionary world, Father Porcellato underlines: "The fact that Brésillac is now officially 'Venerable' fills with joy the Society of African Missions founded by him and other Institutes linked to it, such as the Missionary Sisters of Our Lady of the Apostles, founded by his first collaborator and successor, Fr. Agostino Planque. The Society of Foreign Missions of Paris (MEP), the first of the Missionary Institutes with the exclusive purpose of foreign missions, also rejoices. Brésillac was a member for about fifteen years, until he founded the Society of African Missions in 1856. The Church in India rejoices, in particular the Diocese of Coimbatore, of which he was the first Apostolic Vicar, with a great action to give birth to a prepared and respected local clergy. Finally, the Church of Sierra Leone, of which he was the first Apostolic Vicar, rejoices, even if he lived there only for 40 days, victim of an epidemic fever which in 1859 killed him and all his companions".
The life and work of this missionary Bishop, now venerable, therefore touched three continents: Europe, Asia and Africa. "Today perhaps more than then - continues the SMA Superior General - we realize that we are really all interconnected and that only together can we face the great challenges of today. Pope Francis' ‘Laudato Sì’ reminds us of it, but in our own small way we too experience it in the Society of African Missions, where missionaries of European, African and Asian origin, each with their specific contribution, contribute to making the mission possible especially in areas of the African continent which are further away and less in contact with the Gospel".
"For me and I hope for many of us, this stage in the Cause of beatification of our Founder also means the confirmation that his is a way of holiness - concludes Father Porcellato -. Above all, it confirms the personal and deep relationship that we can have with him. Finding out that the relationship with him is that of a brother and a father who is close to us, who enlightens us and encourages us in the difficulties of the mission. We insistently ask him to intercede for the release of our confrere Fr. Maccalli, Sister Gloria, Fr. Joel and all the other kidnapped missionaries". (SL) (Agenzia Fides, 1/6/2020)

EUROPE/SPAIN - Spanish-American Day: "Not all of our brothers and sisters in Latin America can receive the sacraments regularly"

EUROPE/SPAIN - PMS National Director: "Pauline Jaricot is a gift for the Church"