ASIA/MALAYSIA - Churches help migrants during the time of the pandemic 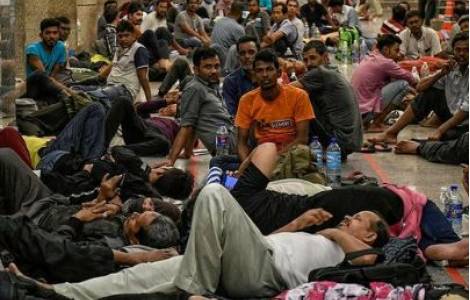 2020-12-19
In Kuala Lumpur, the Church suspends all public Masses and liturgies until Epiphany due to the pandemic

2020-11-19
The Church in Malaysia, a "field hospital" helping 8 million poor, marginalized and suffering in the midst of the pandemic

Kuching (Agenzia Fides) - While the national lockdown to curb the spread of Covid-19 is still in force, many churches in Malaysia are offering aid and services for migrants.
The Movement Control Order (MCO), a national response to the pandemic, established on March 18, took many by surprise for the duration of the lockdown. In fact, it has been extended and is expected to end provisionally on June 9th.
"The lockdown also caused a humanitarian crisis in terms of job losses and food shortages among informal workers who are paid daily. Unfortunately, most of these are foreign migrants", the Jesuit priest, Father Alvin Ng writes to Fides. "The Office that deals with the pastoral care of migrants is committed to providing food aid to foreign migrants", explained Ng.
According to the Jesuit, people have difficulty surviving, the lockdown has proved to be disastrous for many migrants who, firstly, were unable to return home due to the closure of the country's borders and, secondly, they were unable to leave their shantytown to buy food both for lack of money and for fear of being stopped by the authorities at roadblocks.
Some employers provided basic rations to their workers. Various migrant communities were located in remote areas. Moreover - adds the priest - as foreigners, they did not even have the right to government assistance. In short, their situation has deteriorated.
To respond to requests for help from communities within the city and the large area of Kuching, the Office for the Pastoral Care of Migrants of the Archdiocese of Kuching, after collecting data on the number of migrants, location and types of aid needed, started a distribution of food aid.
The immediate support of the archbishop of the archdiocese, Mgr. Simon Poh Hoon Seng was of vital importance, who made a formal request to the Department of Welfare and the State Police to distribute food aid during the lockdown. With subsidies from the archdiocese and generous contributions from parishioners, a team of volunteers, respecting the safety provisions, met to load some vans full of food prepared by affiliated supermarkets. For three days (May 6, 7 and 9), the food aid convoy traveled throughout the city including the suburbs to Samarahan and Bau district. In total, 525 migrants received 445 packs of food for two weeks. Some also received small cash and milk powder benefits for families with young children.
The Migrant Pastoral Office is aware of the fact that this is only a small part of the brothers and sisters who continue to need basic help. The joint commitment of all aid agencies, ecclesial groups, NGOs, other religious and lay groups is needed, in collaboration with the government, to ensure that as many migrants as possible are reached in the end.
"Whether it's locals or foreigners, everyone is the face of Christ whom everyone is called to serve. Starting from a prayer and a thought for them, we can move on to financial help and the offer of a glass of water in the name of God", said Father Ng. (SD/AP) (Agenzia Fides, 30/5/2020)