AFRICA/KENYA - Street children during the times of COVID-19 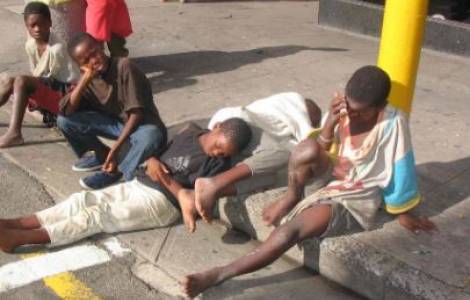 2020-07-04
Corruption undermines the fight against Covid-19: the poorest pay the price

2020-06-22
"We are custodians of our brothers and sisters: Children’s right and black lives matter"

2020-06-16
Covid-19: "Need to protect the most vulnerable" says Chairman of the Commission for Refugees, Migrants, and Seafarers

Nairobi (Agenzia Fides) - The life of the street children of Nairobi has never been easy since they appeared on the streets. They started calling them chokora (garbage). Over the years they have received a lot of media hype, they were the symbol together with the slums and skyscrapers of the big cities of Africa. Then, like everyone else, they grew up and found love and had children. Hundreds of thousands that governments began to "sweep" away from the city center to push them into the slums that surround them like a crown of thorns. No child zone, places where there is no place for children. Tens of thousands who survived amid theft, chores, garbage collection, charity and glue fumes. Even among the inhabitants of the slums they are turned away: their loathsome smell does not invite closeness.
In Kenya there has been a positive change of pace, the government, through the Street Families Rehabilitation Trust Fund (SRFTF), a government-based foundation for the rehabilitation of street people, has contacted several reception centers in Nairobi to welcome the children.
Eighty-seven were welcomed by Koinonia, a Kenyan organization founded by the Comboni missionary Renato Kizito Sesana who tried to make the words of the Gospel his own: "they persevered in listening to the teaching of the apostles and in fraternal communion, in breaking bread and prayers". At the time of the reception there was great enthusiasm and then the backlash of the crisis, but the hospitality continued, says the missionary. "Every week since the lockdown started, we have welcomed 10/20 new people. Jack, Bernard, Fred and Besh went to visit them in the most unlikely places, on the street, under flyovers, in parks, on steep terrain where they had made huts with branches or with plastic sheeting. Every day they convinced 20 or 30 to get help and to be brought to our facilities and others indicated by SRFTF, generally owned by several Christian churches. It was not easy to convince those in charge of these facilities and communities to accept the new problematic guests. They are now distributed in our homes in Ndugu Mdogo (Little Brother) and Tone la Maji (The Drop of Water). For them, the missionary continues, with the lockdown, life on the street had become increasingly unsustainable: fewer people on the street, fewer odd jobs, fewer alms. The curfew put the children in total isolation during the night with possible aggravating circumstances of internal and external abuse of the group".
The missionary stops to think a little and then concludes "the numbers do not give a sense of the beauty of the life that has overwhelmed us, of the faces, of the smiles, of the looks. Of the desire to overcome the inevitable clashes and quarrels that arise in such a large group of people who live in limited spaces. Enthusiastic cheering during football matches in the various pitches inside our homes. Of the placid happiness that is seen contemplating a simple plate of rice and potatoes: they have nothing, but the heart is a mine of resources to explore". (F.F.) (Agenzia Fides, 22/5/2020)