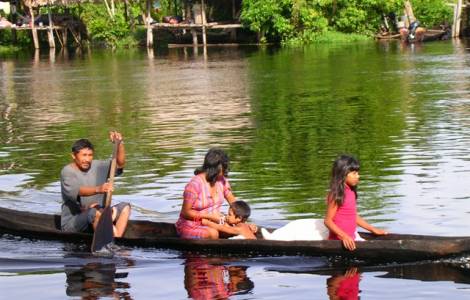 Caracas (Agenzia Fides) - Venezuelan Bishops, together with the ecclesial organizations that deal with indigenous peoples, are in solidarity with the voice of the indigenous communities expressed in their "Document on the COVID-19 situation", and support "their cries, their pains and anxieties".
In the statement sent to Fides, dated May 20, it is emphasized that it is "a hopeless situation that is getting worse and worse due to COVID-19". The pandemic and the consequent isolation aggravate "the serious deterioration of the living conditions of indigenous peoples, caused by the systematic exclusion from their rights to the goods and services necessary for a dignified life". The document underlines that the uncertainty caused by the pandemic "is added to the situation of abandonment of indigenous peoples and to the harmful influence of mining that endangers the very future of these peoples".
6 priority points are therefore indicated. The existence of a specific protocol in the event of contagion from Covid-19 of indigenous peoples is unknown. In some communities, awareness raising activities are carried out without guaranteeing drinking water service and ignoring the economic situation of families. Dispensaries and health centers in indigenous communities have no stable presence of health workers nor the tools to address basic health needs. Many indigenous people have been stuck in the places where they were and there is no prospect of them returning to their families.
Isolation prevents indigenous people from dedicating themselves to cultivation and fishing, also the lack of transport does not allow their craft products to be transported to the markets, making the economic situation even more difficult. In particular, the educational situation is alarming: the lack of fuel has suspended transport, preventing students from reaching schools, while in the majority of communities there is no electricity, no television or internet signal. Uncontrolled mining activity causes armed raids and violence against indigenous peoples who oppose the destruction of their environment.
The signatories of the document, Venezuelan Episcopate (CEV), National Missionary Council (COMINA), Pan-Amazonian Ecclesial Network (REPAM) of Venezuela, Pontifical Mission Societies (PMS), Venezuelan Conference of Religious (CONVER), National Council of the Laity ( CONALAI), demand "in the name of the God of Life", "to put an end to this barbarity", and "draw up a plan of attention for indigenous peoples in the face of this pandemic".
Finally, we recognize "the silent and heroic work of many missionaries who, facing immense difficulties, in the midst of so many sufferings, make God's love present". To the indigenous brothers and sisters they remind, once again, that "they are not alone", since "their yearnings and difficulties are also of the Church". (SL) (Agenzia Fides, 22/5/2020)