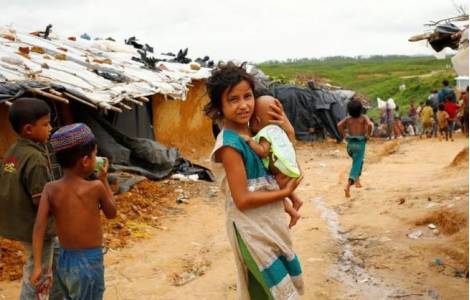 Cox's Bazar (Agenzia Fides) - "It is a difficult job, but now the priority is to stop the infection. In these settlements, where it is almost impossible to keep social distancing, Rohingya refugees are at high risk for the rapid spread of the infection due to Covid-19. It is urgent to put in place all the necessary measures": says to Agenzia Fides the Bangladeshi Catholic George Mithu Gomes, who works in Cox's Bazar as "Program Manager for Disaster Response "of the NGO "World Renew". The alarm began after two women and three men of the Rohingya ethnic group were infected in the Lambashia camp, one of the 34 settlements that welcome refugees.
In the town of Cox's Bazar, just beyond the border between Myanmar and Bangladesh, the Bengali government is home to the largest refugee community in the world: 1.1 million Rohingya ethnic and Muslim refugees who have fled Myanmar live here. Of these, 700,000 arrived in 2017 while a bloody ethnic conflict took place in Myanmar between the army and Rohingya armed groups.
George Mithu Gomes tells Fides: "There is deep concern. In these precarious conditions of life, it is not possible to control the infection and could quickly spread in the 34 refugee camps where the Rohingya live. We must act promptly to stop contagion in refugee camps. "It would be necessary to carry out swabs and sanitary controls, to set up structures and places for quarantine. It is also necessary to sensitize the Rohingya, who know nothing about the disease, they must be taught the necessary behaviors to prevent and contain the spread of Covid-19", he continues.
Fides reports the words of some Rohingya refugees, who think that if the coronavirus infection spreads in the camps, they will not receive the necessary treatments: "We have not received adequate medical treatment in the camps: if the virus arrives, we will die without treatment", says Mahammod Jubiar, 65, Rohingya. Another Rohingya refugee, Iqubal Islam, believes that raising awareness among the refugees is urgent: "The fact that there are many illiterate, refugees do not know how the virus can spread, they do not know how they can defend themselves, they have no idea of the preventive measures". As reported to Fides, Caritas and other NGOs having been busy spreading information about prevention, by activating specific programs to inform refugees.
Abu Toha Bhuya, at the head of the health service of the Government Office for Relief and Repatriation of Refugees, explains: "Rohingyas often go out of the camps at night. They buy medicines and other goods for daily needs. Some are also involved in drug dealing: this is how the virus reached the camp". In addition, 30,000 workers of 140 Non-Governmental Organizations operate in the Rohingya camps in Cox's bazar, who often go to Dhaka and other cities. In this way, they could be coronavirus vectors.
In Bangladesh, 22,268 people are currently infected with Covid-19. Of these, 4,373 have been healed and 328 have died. (FC) (Agenzia Fides, 18/5/2020)

OCEANIA/AUSTRALIA - The help of the Church to Rohingya refugees, between Covid-19 and natural disasters