AFRICA/NIGER - Prayer and hope for the release of Father Maccalli, still in the hands of his kidnappers 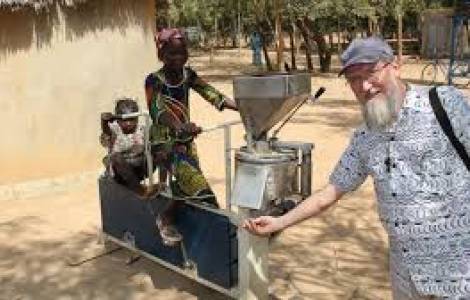 2021-07-27
"Women pray that the sun never goes down, because jihadists attack during the night"

2021-05-14
Assault on the village where the first local Catholic communities were born: at least 5 dead and the desecration of the church

2021-01-28
The testimony of a Christian kidnapped by jihadists

Bomoanga (Agenzia Fides) - Twenty months have passed since the kidnapping of Father Gigi Maccalli, priest of the Society for African Missions in Niger (see Fides, 18/9/2018). The memory, prayer and hope of many are always focused towards his release. "I asked David Sagna, a catechist in Torodi, what do you remember about Fr. Pierluigi", writes to Agenzia Fides Father Vito Girotto, Fr. Maccalli’s confrere, also a missionary in Niger. "The first aspect that David highlighted, keeping in mind and continuing the work of Father Gigi, is how he was welcoming towards everyone, in particular towards the sick". "In Torodi, which is 50 km from Bomoanga, - continues Fr. Girotto - there is a small hospital where Gigi sent malnourished or sick children and asked David to go and see how young patients were doing".
"During the moments of formation of catechists and animators of the liturgy - says the catechist - Fr. Gigi organized everything well, paying particular attention to the community prayer he did with them. In adult literacy he was careful that everything took place according to the established program so that there were good results in all classes and that both teachers and pupils were satisfied, making them understand that this school not only helped them to read and write, but also to live together".
"We appreciated Fr. Gigi’s calmness, firmness and enthusiasm in the proclamation of the Gospel", added Ivana and Dino Avanzino, two of Fr. Gigi’s friends who attended the monthly meetings for adults held by the missionary in Genoa when he was provincial councilor, a few years before he left for Niger.
"It is important for him to sow seeds of the Gospel in the belief that 'the first evangelization is nothing but humanization', as he wrote in his letter. One evening, a guest at our house, had announced that he was leaving for Niger, a new mission, to be built, but he was confident as always: to go where you are called to bring the announcement of the Gospel, without if and without but"- they say.
"We remember his commitment to digging drinking water wells, to taking care of sick children. Each time he came back, he told us about the progress made in the faith of the Gurmancè people and the social and humanitarian progress that he was gradually getting. In a letter in June 2018 he wrote: 'Our decisions, words and actions according to the Gospel always reveal the living Christ present and active in the world. The mission continues and together we continue to be his hands and feet'. These words are for us an encouragement and a sign of hope, hope for Niger's mission and hope for his return".
The Avanzino couple conclude their testimony by recalling Pope Francis who in one of his homilies at Santa Marta said that "we must learn to ask Jesus forcefully and decisively what we want to achieve, we now ask him 'bring Father Gigi back'. (VG/IDA-AP) (Agenzia Fides, 16/5/2020)

AMERICA/HAITI - Three days of closure for Catholic schools and universities: release the kidnapped!

AMERICA/COLOMBIA - The Bishops join the cry of "so many brothers and sisters who ask for peace, respect for life and human rights"

AFRICA/SOUTH AFRICA - The Bishops: "No to violence, but it is urgent to tackle the inequalities that feed it"

ASIA/VIETNAM - Support for the poor and the sick: the Church deeply involved in charity actions for the pandemic

EUROPE/ITALY - The mission of the Friars Minor in the world: "Living the Gospel in fraternal communion, building bridges of dialogue among all peoples"

EUROPE/GREECE - The second Scalabrinian mission has started in Lesbos, to support thousands of arriving migrants

AMERICA/BRAZIL - 36 years after the murder of Father Ramin: by following his example, we renew our commitment to the poor and creation

AMERICA/NICARAGUA - Covid-19: Mayor of Managua holds celebrations for the feast of St. Domingo de Guzman without the approval of the Catholic Church

ASIA - Effects of the pandemic on workers in the textile industry: "Unimaginable human suffering"