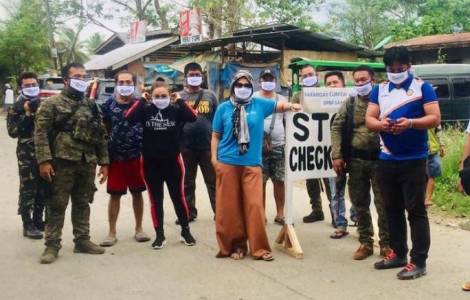 2020-07-18
Abuses of human rights, xenophobia and religious intolerance in Asia: the denunciation of "Franciscan International"

2020-07-11
Environmental disasters and the Church's commitment: the path of safeguarding creation in Central Asia

2020-06-16
Pandemic and children's rights: thousands of children pushed onto the labor market

Yangon (Agenzia Fides) - The Bishops of Asia have joined the call of the United Nations Secretary General, Antonio Guterres and Pope Francis, for a global ceasefire in the face of the unprecedented threat of the coronavirus pandemic: this is what Cardinal Charles Maung Bo, Archbishop of Yangon and President of the Federation of Asian Bishops’ Conference (FABC), said in a message sent to Agenzia Fides asking for "an end to hostilities worldwide". Without cessation of fighting everywhere, the text says "the suffering of many will be prolonged the world over and healing delayed indefinitely".
"The whole planet is in crisis. The pandemic’s consequences are catastrophic for public health and for social and economic life. If we truly wish Myanmar to emerge a united, peaceful, prosperous people, now is the time for speedy, aggressive, respectful decision. Now is the time for wise, coherent, future oriented action. This is no time to escalate conflict, but to end the disease of war that is devastating our world",says the Cardinal.
The message takes up the words addressed by Pope Francis who, visiting Myanmar in 2017, recalled that "conflicts are not resolved through war and antagonism, and differences must be overcome through dialogue and a constructive search for peace".
Referring to Myanmar, the Archbishop of Yangon says that "Myanmar's national and ethnic group leaders are able to choose between the path that seeks trust and cooperation for the good of all and so unite the nation", but notes that "heightened military operations, by whatever sides, contradict all these enlightened initiatives. Civilians are endangered, even by bombardments purportedly aimed at military targets. An economy under severe strain is put at risk by military adventures. Any spike in contagion in IDP camps, among detained persons, or in crowded spaces, gravely threatens the surrounding populations as well".
"The fury of the virus illustrates the madness of war", confirmed the Cardinal, quoting António Guterres and agreeing to launch an appeal to "stop armed conflicts and focus on the real struggle for our lives". The message reminds and praises the nations that, in various parts of the world, have responded positively to this call, such as Cameroon, the Philippines, Yemen and Syria and urges all armed groups to lay down their arms and arm themselves with sincerity and truth"; and take "the most difficult path of overcoming differences face to face with courage and intelligence".
The meetings of the organization "Religions for Peace", in which the Cardinal takes part - concludes the text - "have shown that dialogue in coordinated ways among all parties is possible and fruitful". The text concludes by offering the availability "to encourage and mediate a new and timely dialogue among diverse parties in struggle, all over the world". (PA) (Agenzia Fides, 27/4/2020)