ASIA/KAZAKHSTAN - The policy towards religions does not change: the new government promotes coexistence 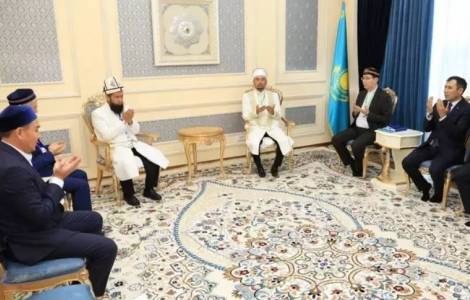 2020-06-20
Covid-19: the renewal of residence visas for Catholic missionaries is difficult

2020-05-04
Coronavirus: the Kazakh Church relies on Mary to overcome the crisis

2020-04-24
The policy towards religions does not change: the new government promotes coexistence

Astana (Agenzia Fides) - About a year after the resignation of Nursultan Nazarbayev, the Kazakh ruler who led the nation from the dissolution of the Soviet Union to March 2019 making freedom of worship one of the flagships of its policy, there seem to have been no changes on the political front towards religions in Kazakhstan. This is what Davide Cancarini, independent researcher on the Central Asian area, tells Agenzia Fides: "Religious relations within the country - he notes - are good. The new president Kassym-Jomart Tokayev pays close attention not to be biased, meeting the representatives of various faiths or giving speeches in which he supports freedom of worship and the promotion of peaceful coexistence between the various religions".
Freedom of worship guaranteed under Nazarbayev and perpetuated by his successor finds its raison d'etre in the careful policy of control of religions promoted in Kazakhstan, a country with a large Islamic majority, aimed at repressing the possible birth or operation of violent Islamic radical groups. To this end, the government establishes moments of encounter during the year, between the various religious leaders, thus favoring a rather formal ecumenical and interreligious dialogue.
In this context, according to Cancarini, a thorny issue today could be represented by the treatment reserved for the Uyghurs - Muslim population - of Xinjigang on behalf of China: "The repression has also affected citizens of the Kazakh ethnic group in recent months, sparking protests in the country of Central Asia. The issue could become complex political-diplomatic management".
In general, the researcher notes, the first year in power of Tokayev was not easy: "Nazarbayev's resignation created great expectations of openness in large sectors of the population and the elections in June 2019, which officially legitimized the new President, took place in a climate of generalized protests. The protests, to a lesser extent, then continued throughout the year, also on the basis of the request for the introduction of reforms in a democratic sense". To try to respond to the hopes that Nazarbayev's resignation raised among the population, adds Cancarini, Tokayev has held a conciliatory attitude, at least verbally, promising openings: "On a practical front, he created the National Council of Public Trust (NCPT), an advisory body with the task of making political recommendations based on the contribution of citizens, political parties and civil society; he then promised a reform of the law on public demonstrations that should have made it easier to demonstrate, then actually approved. If the first organism proved to be little more than an empty container, the second has been greeted with skepticism by numerous activists, who do not see significant changes. The demonstrations held in Almaty in late February and early March ended with the arrest of about 200 and 80 people respectively", he recalls.
According to the researcher, Tokayev has tried to respond to the latent tensions in the country also on the economic front "by presenting for 2020 a national plan to increase the salaries of civil servants in the order of 20-30% and pensions of 7%. However, the attempt risks finding an insurmountable obstacle in the recent collapse of oil following the spread of the coronavirus. In light of Kazakhstan's dependence on revenue related to the energy sector, this is likely to deprive Tokayev of the possibility of increasing social spending, also placing the continued absence of an economic diversification policy in the spotlight".
"In general, therefore, on a practical level, despite the adoption of a conciliatory rhetoric, there have been no significant changes compared to the Nazarbayev period. If Kazakhstan were to suffer serious economic repercussions from the current crisis, it cannot be excluded that the Tokayev presidency may become even less solid", concludes Cancarini.
(LF-PA) (Agenzia Fides, 24/4/2020)

NEWS ANALYSIS - Pakistan: the Commission for minorities and respect for human rights