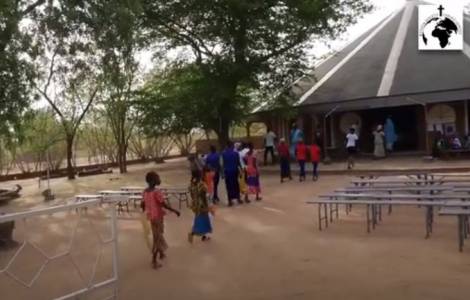 2021-07-27
"Women pray that the sun never goes down, because jihadists attack during the night"

2021-05-14
Assault on the village where the first local Catholic communities were born: at least 5 dead and the desecration of the church

2021-01-28
The testimony of a Christian kidnapped by jihadists

Niamey (Agenzia Fides) - "The ceasefire implored by Pope Francis here in Niger is almost completely unheard: jihadist terrorism continues to bloody this land and claim hundreds of victims. Even the situation at the borders is problematic, just think of what is happening in Libya, Algeria, Nigeria and Mali: Niger is surrounded by armed outbreaks and trafficking of all kinds, from that of drugs to that of human beings". This is the scenario described to Agenzia Fides by Father Mauro Armanino, missionary of the Society for African Missions (SMA), who highlights how conflicts and violence continue in the African country despite the appeal for a "global and immediate ceasefire in all corners of the world", launched by UN Secretary General Antonio Gutierres, and supported by Pope Francis, while the world faces the crisis of the Covid-19 pandemic.
Niger currently lives divided between the presence of foreign troops - the United States, France, Germany and even Italy - and the attacks of Islamic fundamentalism, increasingly aggressive and gathered around the acronym of the Islamic State of the Greater Sahara. On the southern border, the army fights, together with Nigerian, Chadian, Cameroonian and Beninese troops, a war against the militiamen of Boko Haram. Furthermore, groups linked to al-Qaeda in the Islamic Maghreb are also active, connected to those present in neighboring Mali. These formations in the area are financed thanks to the smuggling of various goods, especially drugs and weapons, which pass through the tracks of the great northern desert. Even the trafficking of migrants ends up financing the activities of these groups: according to the UN High Commissioner for Refugees, in 2019 alone it is estimated that the caravan routes between Niger and Libya were crossed by over 300 thousand migrants.
"Strong concern regards the condition of many displaced people in refugee camps, possible outbreaks of contagion, where armed clashes are taking place", underlines Father Mauro. Above all, we must consider the general condition the country is facing: Niger is one of the poorest nations in the world. "The situation is not encouraging", explains Father Armanino, who has been working in the capital, Niamey since 2011. Social indicators of access to education and health, in fact, are among the lowest on the entire planet. Illiteracy is close to 80%; infant mortality under 5 years of age is very high (95.5/1,000) and the average life expectancy is just over 55. Access to adequate health services is 10.9% and access to drinking water is available only for six out of ten inhabitants. In this period of pandemic, the Nigerian Catholic Church expresses its closeness to the population: "Public functions and pastoral activities are suspended - says the missionary - even if the churches are open. State radio and television broadcast Holy Easter Mass last Sunday. The Pope's appeal - Father Mauro concludes - comes here as a distant echo, but the whole population, already exhausted by misery and disease, calls for peace, which is the path of all civil coexistence". (ES) (Agenzia Fides, 18/4/2020)

AMERICA/COLOMBIA - The Bishops join the cry of "so many brothers and sisters who ask for peace, respect for life and human rights"

VATICAN - Pope Francis to the Lebanese: "I greatly desire to visit you"

AFRICA/MOZAMBIQUE - Crisis in Cabo Delgado: "The military route is dangerous and no one knows how it will end" Catholic NGOs warn

AFRICA/EGYPT - Gestures of brotherhood between Christians and Muslims on the occasion of Eid al Adha, the Islamic Feast of Sacrifice

ASIA/IRAQ - Massacre on the eve of the Islamic holiday. Patriarch Sako writes to "Muslim brothers": fratricidal struggles open the gates of hell