ASIA/MYANMAR - The suffering of Christian ethnic minorities: clashes and victims in civil conflicts 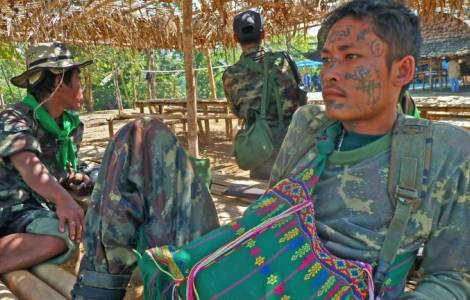 2020-10-27
Violence and tensions in Chin and Rakhine States: food emergency and elections at risk

Yangon (Agenzia Fides) - In the last month over 50 civilians have been killed in conflicts between autonomists and the central State in various regions of Myanmar, especially in the federated States of Chin and Rakhine. In Chin at least 29 people died due to guerrilla and military operations which hit the Township of Paletwa (Matupi district) twice where, in April, the Christian village of Nanchaungwa was targeted by the aviation of "Tatmadaw", as the army of Myanmar is called. The toll of the raid on April 7 is seven dead and 8 injured, but the area had already been hit on the weekend of March 14-15, when at least 21 inhabitants were killed after army fighters opened fire on four villages mostly inhabited by Christians, always in the Paletwa district, wounding dozens of people and causing the escape of about 2 thousand residents to a nearby city.
If war does not make a distinction of belief, the fact that in many areas of Myanmar Christians - and among them Catholics - pay a high price in areas remains, where the presence of the Catholic Church is widespread.
In addition to the effects of the war there are also those of the spread of Covid-19 which only in rare cases has mitigated military actions. Also the ceasefire that has lasted for eight years between the army of Myanmar and the Karen National Union, in February recorded artillery bombings on the villages of Karen population (also with a Christian majority) which was followed by a massive exodus of displaced.
On April 17 in Geneva, UN Human Rights Office (Ohchr) spokesman Rupert Colville said that Myanmar's military operations have resulted in "at least 32 dead and 71 injured since March 23, mostly women and children, and also destroyed and burned schools and houses".
According to Burmese sources, armed clashes are affecting the States of Rakhine, Chin, Karen and Northern Shan, areas where the presence of Christian, Muslim and Hindu minorities is strong. In particular, Christianity - the country's second religion after Buddhism - is practiced mainly by Chin, Khacin, Karen, Shan and Eurasians and is very present especially among the Chin, which makes their federated State the only one in Myanmar with a Christian majority. Catholics are about 750 thousand (about 1.5% of the population), especially among the Karen, Chin, Kachin, and Shan minorities.
For its part, the Buddhist community has given a sign of commitment aimed at "working hand in hand on the basis of a common platform to face Covid-19 and carry out charitable activities through solidarity", said monk Sitagu Sayadaw. The Buddhists, in fact, donated 10 thousand dollars to the Emergency Fund against the virus, established by Pope Francis, delivered to Archbishop Marco Tin Win of the Archdiocese of Mandalay. The authoritative exponent of Buddhism also offered food supplies to orphanages managed by the archdiocese of Mandalay. The monk added that the contribution is intended to be "a sign of compassion", a virtue common to all religions: Buddhism, Christianity, Islam and Hinduism. (MG-PA) (Agenzia Fides, 18/4/2020)

ASIA/MYANMAR - Buddhist New Year and Christian Easter in confinement, due to Covid-19