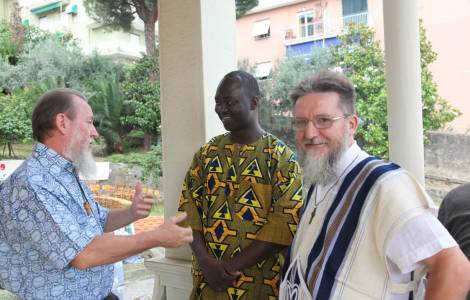 Crema (Agenzia Fides) - "It was a great surprise and you can imagine my joy: after a silence of about 18 months, for the first time we had the certainty of what we have always believed and hoped," writes Fr. Walter Maccalli, priest of the Society of African Missions (SMA), recalling when on the morning of Monday 6 April he was informed of the video containing the message of his brother, Fr. Pierluigi Maccalli, also an SMA missionary kidnapped in Bomoanga in September 2018. "In my heart first amazement, joy, many questions and then the hope of being able to embrace him again soon. Since 17 September 2018 every time the phone rings, I think 'maybe they have freed my brother', and now this seems closer. Watching the video - adds Fr. Walter, who is a missionary in Foya in Liberia - I observed his attitudes, listened to his voice, with his unmistakable timbre and I felt his suffering. At the same time I believe he was aware of the possibility he was given to alleviate our suffering, to comfort all of us, certifying his presence. This Grace has nourished the faith and hope that have sustained me all these months. Very often I experienced that this Grace was communicated to us through the prayers and solidarity of many friends".
"Today, as two thousand years ago, the cross and resurrection, the suffering endured for love, and the victory of new life, the hope for liberation and the journey in the desert remain. For the time being let us continue to pray", writes Fr. Walter.
The missionary reports how even in Foya, every day, during Mass, after communion, they remember Fr. Gigi with this little prayer: «May the Most Holy and Divine Sacrament be praised and thanked at all times. Jesus, free Father Pier Luigi from his captivity and bring him home safely. Amen».
The voice of Father Walter Maccalli is added to that of Father Mauro Armanino, SMA missionary in Niamey. "What Pierluigi has been experiencing for 19 months is one of the most brutal forms of confinement - writes the priest. "His kidnapping and imprisonment are a metaphor of what elsewhere is taken as a measure of containment of the right to mobility. The fact that Pierluigi was taken away from his people, his family and the local Church is an open wound to this day. God has been confined to a mortal ideology that continues to sow violence and destruction. In Crema, Bishop Mgr. Daniele Gianotti will celebrate a Mass behind closed doors for the priest's release this evening, Friday 17 April at 8.30 pm, in the Sanctuary of the Graces of Crema. (WM/AP) (Agenzia Fides, 17/4/2020)

AFRICA/NIGER - Two years after the kidnapping of Fr. Gigi Maccalli: "There is always, somewhere, someone who betrays friends"

AFRICA/NIGER - Two years after the kidnapping of Fr. Gigi Maccalli: "There is always, somewhere, someone who betrays friends"

AFRICA/NIGERIA - The faithful pray for the prompt release of Fr. Amadasun Idahosa, victim of kidnapping for extortion

ASIA/SINGAPORE - During the pandemic, Biblical Apostolate groups promote a personal encounter with the Word of God