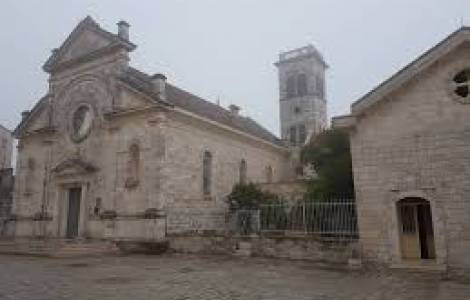 2020-12-14
Monks and nuns of Deir Mar Musa, the love of Christ, source of healing for humanity wounded between war and pandemic

2020-11-26
Archbishop Nassar: even Christians in Damascus reject the "closure of churches" due to the pandemic

Idlib (Agenzia Fides) - In Syria, the threat of the Coronavirus pandemic looms over a reality devastated by the war years, which in the northwestern Province of Idlib still sees a situation of armed conflict involving government army, Russian troops, anti-Assad jihadist militias and Turkish military units.
In the Oronte valley, in the three villages Knaye, Yacoubieh and Gidaideh - about 50 km from Idlib - hundreds of Christians are still there together with priests Hanna Jallouf and Luai Bsciarat, both Franciscans of the Custody of the Holy Land, who remained to carry out the pastoral work in that territory still subject to the domination of the jihadist militants of Tahrir al Sham, opponents of the Syrian government. In the last few days, the military conflict in the area has taken on a level of semi-truce, both because of the precautions taken by the various parties involved to avoid contagion from Covid-19, and above all because of the ceasefire agreement negotiated at the beginning of March between Russia and Turkey, forces that in the field of conflict support respectively the Syrian government army and the anti-Assad militias. In recent weeks, Turks and Russians have agreed to patrol the M-4 highway jointly, a strategic communication route still controlled by jihadist militants.
In this situation, while tactical movements of the troops on the field continue, Father Hanna Jallouf has issued a request for concrete solidarity, received by the Italian Association Aiutiamo la Syria (Aiulas) Onlus", and to be implemented in the days of the Easter feast, to also help the inhabitants of the Oronte valley to perceive "that Christ has risen for them too and are not abandoned by the universal Church". In his letter of request, issued by "Aiutiamo la Siria", Father Hanna briefly outlines the context in which he and Father Luai Bsciarat continue to carry out their pastoral work: "We work in the north of battered Syria. (...) We serve the Christian community that has remained here in the villages of the Orontes; there are about 210 families (almost 600 people) who belong both to the Catholic Church, and also to the Armenian Orthodox and Greek Orthodox Church. We are the only religious out of all the clergy who were in the Idlib Province before the war who remained". The mission of the two priests leads them to help families "in different needs: food, electricity, water, schooling for children". And the form of support they put in place for Easter will consist in the simple distribution of 25 euros to each family, including "35 Muslim families already helped by the Church".
In October 2014 (see Fides, 8/10/2014) Hanna Jallouf, parish priest of Saint Joseph in Knaye (in the photo, the facade of the church without the cross, according to the rules imposed by the jihadists) was kidnapped along with some of his parishioners by a group of militant jihadis of al-Nusra. He was kidnapped after his recent visit to the Islamic Court, where he had gone to report harassment and abuse suffered. Father Jallouf, and then his parishioners, were released within a few days.

During Lent, the “Aiutiamo la Siria” Association also supported a project coordinated by the Marist brother Georges Sabe of Aleppo, which consists in the distribution of refrigerators and washing machines to 45 families displaced from the Syrian city during the bombing period to be able to return to their homes - looted during the war - and return to normal life. (GV) (Agenzia Fides, 7/4/2020).

AMERICA/UNITED STATES - Testimony of a Franciscan after the violence on the Capitol Building, there is need to start afresh from the search for peace and the common good

AFRICA/EGYPT - Pope Francis calls Coptic Patriarch Tawadros: let us together ask God to have mercy on the world