AFRICA/SOUTH SUDAN - Covid-19, "humanitarian aid for the population must be guaranteed" 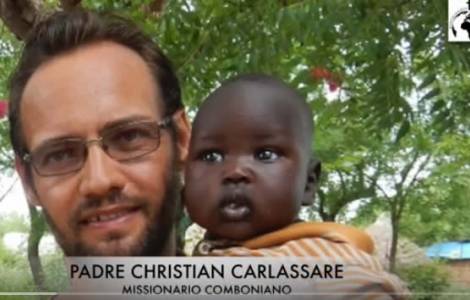 2020-09-22
"All human beings are created in the image of God, no tribe is better than other tribes" says the Bishop of Tombura-Yambio

2020-09-15
Meeting between two Bishops and President Kiir: "Let's work together for peace"

2020-09-04
A Bishop: "The pandemic is an opportunity for Christians to renew their faith"

2020-07-31
Violence does not stop, while outbreaks of coronavirus and malaria increase

Juba (Agenzia Fides) - "Closing the borders in South Sudan means condemning thousands of people to hunger: the food security of the population still depends on exports from neighboring countries as well as humanitarian aid. For this reason, the government has asked Uganda to let the food and gasoline trucks pass". This is what Father Christian Carlassare, an Italian Comboni missionary who lives in Juba, reports to Agenzia Fides, talking about the precautionary measures put in place by the young African state in response to the spread of the Covid-19 pandemic. The Ministry of Health in past days announced the closure of all the other airports present on the national territory, with the prohibition of international flights and the closure of borders.
According to UN data, about 6 million people, 60% of the population, urgently need humanitarian assistance, 20% more than last year. "The country would be in a critical situation if it were to face an epidemic of this type", notes Father Christian. In February and in the first weeks of March there were numerous movements with the neighboring states: "It is feared, therefore, that the virus may spread also in South Sudan - explains the Comboni priest - while the hope is that the hot climate limits the spread of contagion; but we will only know in a couple of weeks".
"Currently - specifies the religious - there are no data available about the infection: no cases have yet been confirmed in the country. As a precaution, schools have also been closed for a month and gatherings, including religious activities, have also been prohibited: "With the suspension of community celebrations - reports Fr. Carlassare – we need to find other forms of closeness to people and those who suffer. For the moment there is no obligation to remain isolated at home. There is only a curfew from six in the evening to six in the morning. During the day, one can visit families. Small grassroots communities can remain active and carry out their prayers at a family level".
Television, the Internet and other social media are not yet accessible to the majority of the South Sudanese population: "The radio - the missionary notes - carries out an important service: each diocese has its own broadcaster which broadcasts programs that facilitate family prayer and bring a word of comfort and hope".
Although important, the measures adopted appear insufficient to face the complex reality of a country like South Sudan, tormented by hunger, poverty and disease: "The first challenge - says Fr. Carlassare - concerns the possibility of intervening if there are infected people, the possibility of carrying out swabs is very limited and confined to the capital alone. In addition to this - he continues - public health is not equipped: it can isolate the patient but there are no intensive care units with ventilators and oxygen. We Comboni missionaries have the direction of the diocesan hospital of Mapuordit where the only ventilator is that of the operating room". The other challenge concerns prevention: according to Father Christian "the practice of isolation and quarantine is very difficult to implement in a country like South Sudan for many reasons, first of all - he explains - many families live in huts or houses that have only one room that is shared on average by five or six people. Life takes place almost entirely outdoors". At home, no food is stored, except flour and not much else: "The hygienic conditions of markets, formed by stalls often in dusty and very crowded squares, are very precarious".
"The new transitional government has an important responsibility: to face this possible crisis without divisions", notes the missionary. "This epidemic, as Pope Francis said - he concludes - caught us by surprise, but at the same time has made us important and necessary, all with the need to comfort each other, all called to row together since we are on the same boat". (ES-PA) (Agenzia Fides, 4/4/2020)

AMERICA/PARAGUAY - Catholics of Concepcion: "Let us pray for the release of our kidnapped brothers"

AFRICA/MALAWI - Towards Mission Day: "Responding generously to the call of the Lord"

AFRICA - Father Maccalli free: "I have no other offer than the offer of my life"