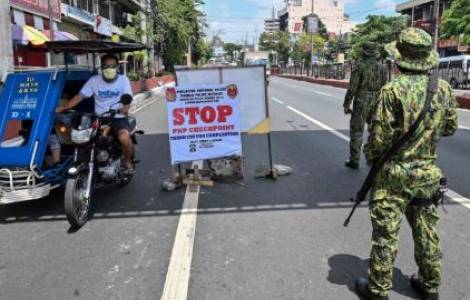 Manila (Agenzia Fides) - The fight against the Covid-19 pandemic has not slowed down the "drug crusade" in the Philippines. "Currently, the country is facing a double war: one concerning the war on drugs and the other against the coronavirus", says Catherine Guzman, Catholic laywoman of the diocese of Cubao, near Manila, to Agenzia Fides. "We had hoped that the war on drugs would come to an end with efforts to stop the pandemic, but this is not happening", she notes.
Since 2016, President Rodrigo Duterte has started anti-drug policy to kill criminals and drug addicts, often targeting the poorest neighborhoods in the Philippines and especially those who live in vast slums. So far it has caused 6,600 official victims, but about 30,000 including people killed by unidentified "vigilante squads" and armed executioners: a long trail of extrajudicial killings.
Despite the pandemic, the government's deadly push for the "war on drugs" continues, and police attention has also shifted to other areas of the country and other targets.
While the coronavirus emergency has already killed 144 Filipinos and records over 3,100 cases of infection, the government has imposed a lockdown of the entire northern island of Luzon, with 57 million people. Provincial and municipal leaders have imposed similar measures in their own communities, practically the entire country of 104 million people in quarantine.
On April 1, Rodrigo Duterte ordered the police and military to shoot people who do not respect the lockdown of the nation. "We are really worried and shocked. We are living a double battle every day: with the pandemic or with the drug-related murders", says Sebastian Cruz, 23, to Fides, who lives in a slum in Manila, where people are forced to leave the house to get food.
In civil society, human rights groups have called for the immediate cessation of police operations, warning against further abuse during the national health crisis. "It is paradoxical to witness extrajudicial killings while the nation is committed to saving lives from the deadly coronavirus", said Carlos Conde, activist of the Human Rights Watch NGO in the Philippines. Paulin Romer, social worker, hopes that "the national health emergency will lead to the end of the so-called anti-drug crusade" and that "the culture of impunity will cease, so law enforcement can have a free hand to kill without consequences". The lockdown, she notes, "has exacerbated social inequality in the country, leading to further violations of dignity and human rights". (SD-PA) (Agenzia Fides, 4/4/2020)

AMERICA/ECUADOR - Towards Mission Day: despite Covid, missionary animation has not stopped

ASIA - The Bishops of Asia: live with hope in times of pandemic