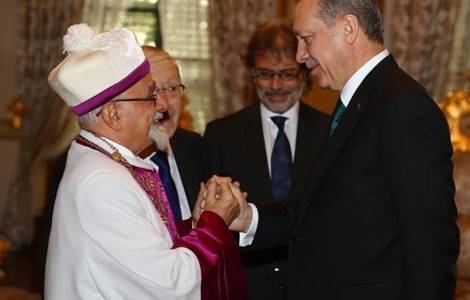 2020-05-15
Erdogan: Armenian and Greek "lobbies" conspire against the Turks even during the time of the pandemic

2020-05-06
Christian doctor Murat Dilmener, the "doctor of the poor" dies from coronavirus

2020-04-08
COVID-19: Christian foundations contribute to funds for the solidarity campaign wanted by Erdogan

Ankara (Agenzia Fides) - The Turkish foundations headed by minority religious communities are preparing to participate in the collection of donations launched by President Recep Tayyip Erdogan as a "National Solidarity Campaign" to collect resources necessary to counter the spread of the coronavirus pandemic in Turkey. The Jew Moris Levi, representative of the Foundations of the minority religious communities within the National Assembly of the Turkish Foundations, told the Turkish media that the whole sector of the Foundations represented by him, without exception, has already taken steps to respond quickly to the request for concrete solidarity expressed by the Turkish President, while Isaak Haleva, Chief Rabbi of the Jewish community in Turkey (in the photo together with Erdogan), has already announced that he will donate the equivalent of five months of his personal salary to the donation campaign.
On March 30, Erdogan launched the "National Solidarity Campaign" to support the new coronavirus, conducted under slogans aimed at affirming Turkey's "self-sufficiency" in such battle. Erdogan inaugurated the collection of donations by announcing that he had donated the equivalent of seven months of his personal salary to the campaign, underlining that the initiative aims to support above all those who struggle more economically in daily life, starting from workers who are not receiving their salaries. Members of the government also joined the campaign with a total donation of 5.2 million Turkish lira (equivalent to 791 thousand dollars).
In recent weeks, among the conspiracy theories circulated in the Turkish media about the pandemic, those of Fatih Erbakan, leader of the Yeniden Refah Partisi movement, have been noted: in his opinion, "Although there is no concrete evidence, Zionism could very well be behind the coronavirus".
At the beginning of March (see Fides, 9/3/2020), the communication office of Turkish President Recep Tayyip Erdogan had sent to the foundations that belong to the minority religious communities the request to sign a document of unconditional support for the Turkish government and army, at a time when Turkish soldiers continue their operations on the scenarios of the ongoing conflict in the Syrian province of Idlib.
More than 40 villages and neighborhoods in the Country are in quarantine, due to the epidemic. According to official figures provided by the Turkish authorities, at the end of March the confirmed cases of people infected with coronavirus was around 11 thousand units, with less than 800 patients in intensive care.
The donation campaign launched by Erdogan was harshly criticized by representatives of the opposition. Meral Akşener, founder of the Iyi Party, has controversially invited the Turkish President to add the plane given to him by the Emir of Qatar to his donations.
In Turkey, the approximately 170 foundations linked to ethnic and religious minorities present in Turkey - including those animated by Jews and by Christian Armenians, Greeks, Assyrians, Syrians, Chaldeans, Bulgarians and Georgians - operate according to the provisions and regulations defined by the Directorate General of the Foundations. In recent years, these bodies are in a situation of institutional uncertainty: in 2013 a new regulation had been drawn up to redefine the relations of the Foundations with the governmental apparatuses and their internal functioning, but this de facto regulation has never entered into force, preventing the renewal of the executive positions of the individual institutions. (GV) (Agenzia Fides, 3/4/2020)

ASIA/ISRAEL - Initiatives to revitalize the Aramaic language and identity continue