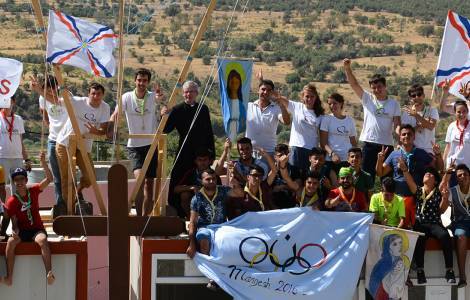 2020-02-25
Iraqi parliamentarians of the Christian component: we will not vote for confidence in the Allawi government

Baghdad (Agenzia Fides) - French authorities on Thursday 26 March said four aid workers of French Christian non-governmental organization SOS Chrétiens d’Orient were released. The four were missing since January 20. The President of the French Republic Emmanuel Macron - as we read in the text disclosed by the Elysée - «welcomes the release of our three nationals Antoine Brochon, Julien Dittmar, Alexandre Goodarzy and Iraqi Tariq Mattoka, all employees of the NGO SOS Chrétiens d 'Orient'. In the official statement, it is stressed that "the French authorities did everything in their power to get the four released and expressed its thanks to the Iraqi authorities for their help in this matter.
The SOS Chrétiens d'Orient Association, at the announcement of the release, also thanked the French and Iraqi authorities, and expressed its congratulations and thanks through its official channels, also "for the incredible movement of prayers and solidarity" following the news of the kidnapping.
The official statements issued by the Elysée and by the Association itself do not currently add details regarding the authors and the methods of the kidnapping, nor do they even report details about how the release took place.
The four militants of SOS Chrétiens d'Orient, as previously reported by Fides (see Fides, 27/1/2020), disappeared on January 20. They were in Baghdad to renew their visas and register the association with Iraqi authorities. For security reasons and to protect the men’s safety, their names had not been made public. In a press release issued on social networks on Friday 24 January, SOS Chrétiens d’Orient reported that it had lost contact with its four employees since the previous Tuesday, and that it had reported the disappearance of the four to French and Iraqi authorities. The French NGO stressed that the four missing employees were experienced people and had always carried out their initiatives in full compliance with safety standards continuously updated to respond to new emerging pitfalls in that region.
SOS Chrétiens d’Orient has its headquarters in Paris, and presents itself as an organization dedicated to supporting the Christian communities of the East, also through the financing of social and educational projects. Currently, the organization is present with "permanent missions" operating in Syria, Iraq, Lebanon and Egypt. The founders of the association, formed in 2013, are Charles de Meyer (who was in the past assistant to French right-wing MP Jacques Bompard) and Benjamin Blanchard, former collaborator of the Front National Marie-Christine Arnautu MEP. The director of the Organization's initiatives, François-Xavier Gicquel, was also an old Front National militant. According to data reported in 2019 by Le Figaro étudiant, since the beginning of its activities the Association has sent about 1500 employees and volunteers to carry out their projects in the Middle East. In February 2017, the organization was recognized as a "national defense partner" by the French Ministry of Defense.
France had announced the withdrawal of its soldiers from Iraq on Wednesday 25 March, where several hundred French soldiers were participating in the training of Iraqi security forces, as part of the operations carried out by the US-led international anti-jihadist coalition. French authorities had motivated the withdrawal of French soldiers from Iraq with the need to concentrate resources and energies on the front of the emergency represented by the coronavirus pandemic. (GV) (Agenzia Fides, 27/3/2020)

ASIA/TURKEY - "I love Turkey". Ten years ago the murder of Bishop Luigi Padovese, "man of communion"