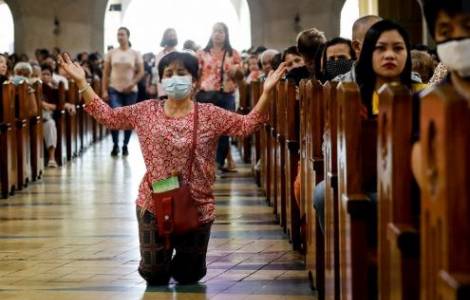 2020-10-06
Cardinal Tagle: "We must use our resources responsibly in times of pandemic"

Manila (Agenzia Fides) - "Let us do our part in this fight against the pandemic. Let us remain vigilant and continue to monitor updates from legitimate and reliable sources. We live in the metropolis with the spirit of monks and hermits, immersed in prayer and trust in God": this is the testimony released to Fides by Pauline Soriano, a Catholic laywoman residing in Manila, the Philippine capital placed since 12 March "in community quarantine" by a decree of President Rodrigo Duterte. The "total block" is an energetic attempt to stop the spread of the coronavirus (COVID-19). "The crisis is very, very clear. The virus is spreading across the country", said Duterte announcing the measure. Accepting the recommendation of the appropriate task force on the epidemic, the government decided to suspend "land, domestic air travel and domestic maritime from 15 March to 14 April to and from Metro Manila", the metropolis that includes 16 cities and is home to over 13 million inhabitants. "It is a matter of protecting the public interest and public health", he said inviting citizens to collaborate, while the Ministry of Health has already announced five deaths and 52 confirmed cases in the country.
The police have already drawn up plans to deploy personnel along roads, highways, and airports and ports to enforce the blockade. Private companies have been instructed to apply smart working or other flexibility measures. Assemblies are prohibited while schools and universities of all levels are closed until April 12th.
Dioceses and parishes of Metro Manila suspended Masses or religious services after the President announced the "community quarantine". "We are in Lent and we take extra time to pray fervently. We believe as a community that, with the grace of God, we can overcome this crisis", he added.
The Bishop of Antipolo, Mgr. Francisco De Leon invited the faithful "to pray St. Rocco, patron saint of the sick, plague and infected, and to seek his intercession in the present health crisis". "Let us join in prayer and against the plague of the coronavirus, let us turn to St. Rocco, so that he can intercede for us. Let us invite him to pray for us to the Lord to end this epidemic", he said in a message.
Bishops, priests and religious continue to remind the faithful to observe the precautionary measures imposed by the health department, such as avoiding any physical contact, keeping distance. Devotional practices such as touching or kissing statues, images or other religious objects are also banned. According to observers, it will not be easy to live Holy Week rites in the Philippines, characterized by massive gatherings of thousands of faithful and mass religious groups. (SD-PA) (Agenzia Fides, 14/3/2020)

AFRICA - Covid-19: WHO explains the factors that have led to the low number of cases in Africa