ASIA/PAKISTAN - Appeal of religious leaders to the State and the international community: to guarantee justice for the murder of Saleem Masih 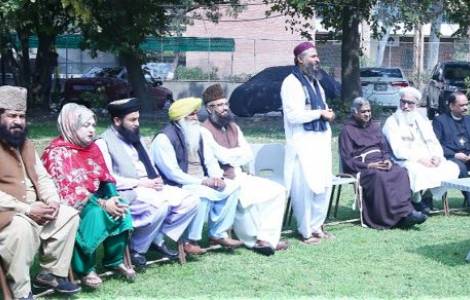 2020-05-22
Quota reserved for non-Muslim students in Punjab universities: a positive step for minorities

2020-05-19
The government announces the re-opening of Churches in Punjab: joy among the faithful

2020-05-15
Religious leaders gathered in prayer and fasting: "God free us from the pandemic"

Lahore (Agenia Fides) - Outrage and condemnation for "a barbaric, inhuman and atrocious crime"; request to provincial and federal governments to "punish the killers firmly"; appeal to international organizations to promote the protection of religious minorities in India and Pakistan: requested by the National Commission for Interreligious Dialogue and Ecumenism (NCIDE) and the Church of Pakistan (part of the Anglican Communion) stigmatizing together the brutal murder of Saleem Masih, a young Christian killed in the Kasur district, in Punjab in recent days.
As communicated to Agenzia Fides, several Christian and Muslim religious leaders met yesterday in Lahore, addressing the issue and discussing what to do. The meeting was chaired by Mgr. Azad Marshal, Anglican bishop of the Diocese of Rawalpindi, in the Church of Pakistan, in the presence, among others, of Fr. Francis Nadeem OFM Cap, NCIDE Executive Secretary, Fr. Emmanuel Khokhar and Islamic leader Muhammad Asim Makhdoom. All those present "expressed deep regret" for the events that had taken place, a sign of widespread intolerance towards Christians, and also for the behavior of the police who did not take harsher measures by stopping and immediately releasing the perpetrators of the crime.
Francis Nadeem OFM Cap declares to Fides: "It is the State's responsibility to provide security to all citizens of the country without any kind of discrimination. All citizens, of all religions, are equal, contribute to the development of their beloved nation and deserve equal rights. We are a nation and live under a single Constitution and a single flag. The State must enforce these fundamental principles".
Bishop Azad Marshal said he himself "will file a First Information Report against the criminals and will not step back until the perpetrators receive the appropriate punishment".
The assembly of religious leaders expressed pain and bitterness for the persecution suffered by Christians in Paskistan, also recalling that suffered by the Muslims of India, inviting, for both scenarios, to avoid any discriminatory law and behavior, respecting the "principle of citizenship".
As reported to Fides, the assembly made the following decisions: launch an appeal to world human rights organizations "to take immediate action to stop violence against Muslims in India and against religious minorities in Pakistan"; launch an appeal to the government of Pakistan so that, "instead of proclaiming empty slogans, take practical measures to avoid this type of incident in the future", bringing the perpetrators of Saleem Masih’s murder to justice and actively promoting interreligious harmony in Pakistan.
Saleem Masih, 22, a Christian farmer, was brutally tortured by local landowners in Kasur on charges of "polluting" a well. On February 25, Saleem had finished working in the fields in the village of Baguyana and while he was washing himself a group of Muslim men, including Sher Dogar, Iqbal, Altaf, Jabbar and Haji Muhammad, started beating him. They cursed and beat him, calling him a "filthy Christian". They tied his hands and feet, and continued to torture him with sticks and a red-hot iron rod, causing him multiple fractures and internal and external injuries, all over his body. The attackers kept him for about three days before returning the body to his family. The young man, who was taken to hospital in Lahore on February 27, died due to his injuries on February 28. (PA) (Agenzia Fides, 5/3/2020)

AFRICA/NIGER - The cross completed eliminated, symbol of the parish of Fr. Maccalli

ASIA/PAKISTAN - Religions united for World Prayer Day on May 14th

ASIA/PAKISTAN - Cardinal Coutts: "We serve people without any discrimination, in the time of Covid-19"

ASIA/PAKISTAN - Ecological operators, almost all non-Muslims, at high risk of contagion for coronavirus