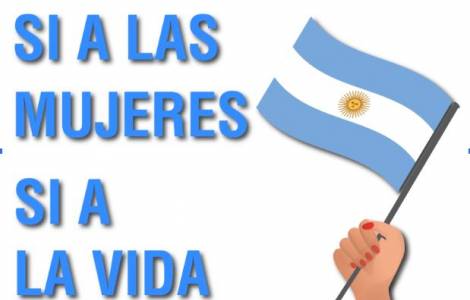 2020-06-20
The Bishops: a look at those who have lost their bread, their roof and their jobs, even if they are migrants

2020-06-17
"We are all Amazon": Mgr. Ojea calls for anti-Covid emergency measures also for the inhabitants of the Amazon

Buenos Aires (Agenzia Fides) - As part of the celebration of International Women's Day, March 8, and on the occasion of the legislative discussion of the project to legalize abortion, the Executive Commission of the Argentine Bishops’ Conference (CEA) invites all Bishops to concelebrate Mass in the Basilica of Lujan, Sunday 8 March at 11 am, to ask for the protection of human life from conception to natural death. As the statement sent to Fides informs, the slogan of the celebration will be: "Yes to women, Yes to life". "We invite all the People of God and all men and women of good will to join this common prayer for life together with the Virgin of Luján, patroness of the Argentine people", is what is written in the text of the Bishops’ Conference.
In his speech delivered on March 2 at the official inauguration of the ordinary session of Parliament, Argentine President Alberto Fernández announced among the various projects to revive economy, face the social crisis and reform justice, also the short presentation of a bill to legalize abortion, currently illegal in the country except for some specific cases. Together with the abortion law, another law will be presented, he said, to ensure assistance to pregnant women and to guarantee their rights together with those of their children in the first thousand days of life.
The Argentine Bishops have been raising their voices for some time, as the new law would only legalize abortion in all respects. Today in Argentina, abortion is legal only in case of rape or when women's health is at risk. The new measures, on the other hand, aim to legalize it in all respects, despite the fact that the Senate voted against it two years ago, during Macri's presidency. In their Christmas 2019 message, the Bishops returned to the topic: in addition to defining this provision "inappropriate", they reiterated that Argentines are "in favor of the dignity and sacred and inalienable value of life".
A few days after his inauguration, the Executive Commission of the Argentine Bishops’ Conference (CEA) visited the new President of the Republic, Alberto Fernández (see Fides, 19/12/2019). They talked about the fight against poverty, the protection of creation and the protocol on the decriminalization of abortion. According to the statement released by CEA, the Bishops expressed "their surprise and at the same time the concern over the protocol presented by the Ministry of Health, which in practice authorizes free abortion" and reiterated that "the Church has always defended and will defend life, from conception, in a decisive and clear way". (SL) (Agenzia Fides, 4/3/2020)

ASIA/INDIA - The Apostolic Nuncio: "To announce the Gospel of mercy in daily life"

AFRICA/NIGERIA - "Rape is repulsive, reprehensible and dehumanizing" says Mgr. Kaigama in the face of the increase in sexual crimes

AMERICA/EL SALVADOR - The Archbishop of San Salvador for Corpus Domini: "Life is precious and we must protect it"

EUROPE/BELGIUM - Bishops' letter: in the time of pandemic, Christians have "a hope to offer to the world"