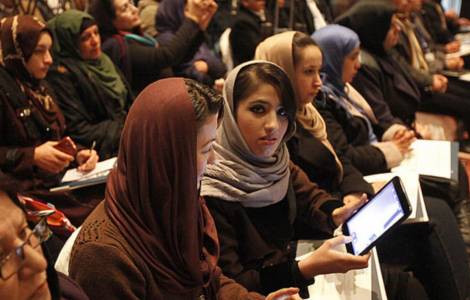 Kabul (Agenzia Fides) - Unity and cohesion: this is what the representatives of Afghan civil society are asking for in the face of political divisions following the announcement of the results of the presidential election. On February 18, Hawa Alam Nuristani, at the head of the Independent Electoral Commission, said that Ashraf Ghani, President-in-Office, obtained a second term. With about 924 thousand votes, he most probably obtained 50.64% of the preferences, compared to 39.52% (about 721 thousand) of the main opponent, Abdullah Abdullah.
However, the result is contested by Abdullah, with whom Ashraf Ghani shared the leadership of a government of national unity imposed by the then US secretary of State, John Kerry, since September 2014, in order to address the controversy over the election results. In 2014 the solution was a "two-headed government", today the risk is the birth "of a parallel, broad and inclusive government". This is what Abdullah announced, supported by some local parties and General Abdul Rashid Dostum. From his residence in the northern province of Jowzyan, Dostum called for mass protests against what he calls a "fraudulent victory", declaring himself ready for the appointment of the governors of the northern provinces, where candidate Abdullah, exponent of the Jamiat-e-Islami, party with Tajik majority, obtained more votes.
For now, the calls for demonstrations have not been accepted. The population looks with disenchantment and skepticism on the results, which arrive almost 5 months after the elections. The exponents of civil society are not surprised: "People are disillusioned, they have no confidence in the government, in the institutions, in the whole system," says Najiba Ayubi, a well-known face of civil society and director of "The Killid Radio", a widespread network of independent radios. "The government is perceived as illegitimate, the elections are vitiated by irregularities", adds Ayubi, who recalls the low participation in the vote: the total votes were 1 million and 823 thousand, less than a fifth of the electorate registered in the lists and just 18.8% of the approximately 9.6 million registered in this last election round. The votes for Ghani represent 9.6% of the registered electorate, said Thomas Ruttig of the Afghanistan Analysts Network, while those for Abdullah 7.5%. While enjoying so little consensus, each of the two candidates claims a legitimate victory, further polarizing the political landscape. The situation is already in fibrillation as the peace agreement between the United States and the Taliban approaches, a prelude to the negotiation between the Koranic students and the representatives of the government of Kabul: "Unity, cohesion are needed, it would be necessary to put the nation's interest before personal or party one, but there is no trace of this", notes Hamid Zazai, director of Mediothek Afghanistan, an organization that promotes media pluralism. "To deal with the Taliban, we need a united delegation, with a shared agenda, a clear idea of the Country to be built. The post-election chaos proves the opposite: personal interests and divisions prevail". (GB) (Agenzia Fides, 21/2/2020)

AMERICA/BRAZIL - Independence Day: "seeing the many riches that exist in our differences"