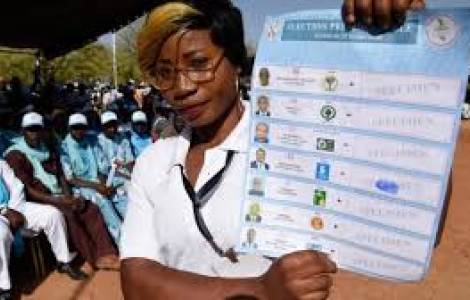 2020-09-01
A missionary from the diocese of Sokodé: "Again confined even if it is impossible to comply with health measures"

Kolowarè (Agenzia Fides) – May tomorrow’s elections, February 22, have a peaceful outcome, and take place in transparency, according to the search for the common good of the nation: with this intention, the Christian communities in Togo are gathered in prayer, in response to the invitation of the Catholic Bishops of the country. In fact, on 20 February, the election campaign for the presidential elections in Togo scheduled for 22 February 2020 ended amid strong tensions. In total, 3.6 million voters are called to the polls, who will have to choose the new President of the Republic from among 7 candidates.
According to local sources, the opposition is more divided and weakened than ever, and practically non-existent. Electronic voting control has been canceled and it is common opinion that Faure Gnassingbé, president of Togo since 4 May 2005 and son of the previous president, Gnassingbé Eyadéma, will be elected by a large margin of consensus.
"Our small community in Kolowaré has responded very positively to the proposal of the Bishops who invited all the parishes of the country to gather in a triduum of prayer for a peaceful outcome of the elections", says to Agenzia Fides Father Silvano Galli, of the Society for African Missions, missionary in Kolowaré. "People come in large numbers to evening prayers. From Monday every evening at 5.30 pm we gather in a moment of prayer in front of the Blessed Sacrament".
Fr. Galli explained that in order to animate the prayer of his community he took inspiration from the meeting that Pope Francis had, on 25 October 2019, with the Servants of Mary in which the Holy Father invited them to "be servants, with Mary in the hope of a changing world".
"In yesterday's final prayer meeting, Thursday 20, we were inspired by what Pope Francis said - continues the missionary - taken from the prayer meeting with the representatives of the various religious denominations on May 6, 2019 in Sofia. On that occasion, the Pope said: ‘Each of us is called to become a builder, a craftsman of peace. Peace that we must implore and for which we must work ... to build a culture in which peace is a fundamental right. Active and fortified peace against all forms of selfishness and indifference that make us prefer the petty interests of some to the inviolable dignity of each person’. These are words that today inspire our commitment in Togo".
According to the World Democracy Index 2019 of the Economist Intelligence Unit, in terms of democracy, Togo is still at the bottom of the ranking due to the governance of Faure Gnassingbé who, in his third presidential term, is at the head of a regime that violates human rights and restricts fundamental freedoms, compromising electoral processes. (SG/AP) (Agenzia Fides, 21/2/2020)