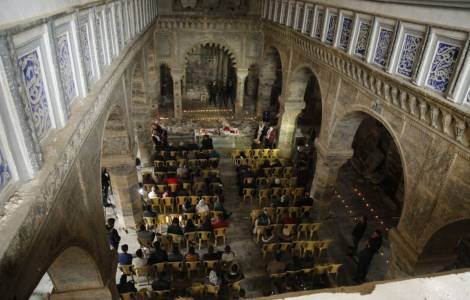 2020-02-25
Iraqi parliamentarians of the Christian component: we will not vote for confidence in the Allawi government

Mosul (Agenzia Fides) - The works of reconstruction and restoration of the church of St Thomas in Mosul will begin by April, devastated - but not completely destroyed - in the time when the Iraqi metropolis was under the control of the jihadists of the self-proclaimed Islamic State. The reconstruction of the Christian place of worship, belonging to the Syriac Catholic Church, is also presented by local commentators as a sign of the rebirth of Mosul: UNESCO will support the restoration work, thanks above all to a substantial funding provided by the United Arab Emirates. The project is part of the "Revive the spirit of Mosul" initiative, launched in 2018 and aimed at raising funds to rebuild monuments and places of worship that symbolize the plural, multiethnic and multireligious identity of the North Iraqi city, and which have undergone serious damage during the jihadist occupation. The restoration program received $ 50 million in funding from the United Arab Emirates authorities.
During the jihadist occupation and in the conflict phases which ended in December 2017 with the Iraqi armed forces reconquering Mosul, the church of St Thomas had suffered serious damage to the external walls and the internal colonnade that separates the naves. The symbolic extent of the restoration of the church of St Thomas was highlighted in a UNESCO statement, which describes the Christian place of worship as an emblem of the history of Mosul, which in the past was a "crossroads of cultures and a peaceful refuge for various religious communities over the centuries". The church is located in the historical part of the city, on the eastern bank of the Tigris river, and was built in 1859.
After the years of the jihadist occupation of Mosul and more than a year and a half since its release, the church of St. Thomas, still full of rubble, hosted a "Mass for peace" on Thursday 28 February 2019 (in the photo) which also recorded the presence of Muslims and members of non-Christian minorities, in the sign of the desired reconciliation between the various components of the local population. The Eucharistic liturgy, as reported by Fides (see Fides, 1/3/2019), was celebrated by Syrian Catholic Archbishop Boutros Moshi, and saw the participation of Chaldean Archbishop Najib Mikhail Moussa OP, together with several nuns, priests, representatives of civil society organizations and groups of Muslims, Yazudis, Shabaks, Kurds and Turkmen.
That Eucharistic liturgy represented an important step in the project supported by the Italian Association "Un Ponte Per ...", a project aimed at supporting initiatives and processes of reconciliation between the various components of the population and overcoming the wounds, resentments and suspicions left behind from the conflict.
In the context of the "revive the spirit of Mosul" initiative, restoration work has also already begun on the great mosque of al Nuri. On July 5, 2014, Abu Bakr al Baghdadi made his first speech after being proclaimed "Caliph" of the Islamic State.
Meanwhile, on Sunday 16 February, Najm al-Jubouri, governor of the Iraqi Province of Nineveh, reported that 79 Christian families have recently returned to their homes in the Nineveh Plain, from where they had had to flee in June 2014 in front of the advance of the jihadist militias of Daesh. Al Jubouri reiterated that the return of IDPs to their traditional settlement areas is a priority for Iraqi local authorities. Nonetheless, several researches and investigations into counter-exodus trials agree that the percentage of internally displaced persons who have returned to their homes in Mosul and Nineveh Province remains fairly low. (GV) (Agenzia Fides, 19/2/2020)