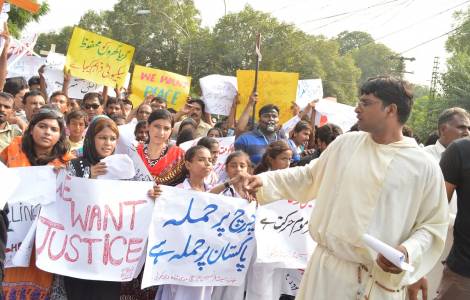 2020-02-25
Dialogue and fraternity: the legacy of the Abu Dhabi Declaration in Pakistan

Islamabad (Agenzia Fides) - The standard of respect for human rights in Pakistan is worrying, especially for those who live in poverty, are of lower social status or belong to ethnic or religious minorities: this is what is said in a new Report published by the organization "Christian Solidarity Worldwide", committed to monitoring the condition of Christians and religious minorities in the world. The new report sent to Agenzia Fides, entitled "Pakistan: Religious freedom under attack", notes "a class and caste dimension in the phenomenon of discrimination, on an ethnic or religious basis, which is still deeply rooted in Pakistani society".
Furthermore, the document notes, the situation of religious freedom continues to deteriorate: numerous violations continue to occur, even since Prime Minister Imran Khan, at the head of the "Tehreek-i-Insaf" party, is in government. The death of Asma Jahangir, one of Pakistan's most prominent human rights lawyers and activists, who died on February 11, 2018, "left a mighty big hole in the community of people and organizations who are committed to promoting the country's human rights", says the text.
The CSW document reports that "cases of blasphemy, sectarian violence and targeted attacks on religious minorities and human rights defenders continue to be registered", while groups with an Islamist agenda such as Tehreek-i-Labbaik Pakistan are flourishing (TLP). The TLP is led by a leader supporting the contoversial "Blasphemy Law", Khadim Hussain Rizvi, defined as "preacher who spreads a sectarian and radical movement". "The country - reads the Report - has further moved away from its secular and pluralistic roots, while religious minorities face an increasing discrimination, hostility and injustice".
The CSW NGO is concerned about the increasing politicization of blasphemy laws, formed by Articles 295a, 295b and 295c of the Penal Code of Pakistan, and by the hostile legislation to the "Ahmadiyya community. Such laws, the text says, "are used by Islamist groups not only against religious minorities, but also to gain political consensus". The conversions given by the government to political-religious groups such as the TLP, following the acquittal of Asia Bibi, "continue to challenge the state and its institutions, highlighting the weaknesses of both. "These developments - it is noted - "have questioned Imran Khan's "Naya Pakistan" (New Pakistan) and its commitment to promoting tolerance and protecting minorities, as the judgment on cases of blasphemy has moved from the Courts to the squares".
"A disproportionate number of accusations and denunciations of blasphemy - notes the text sent to Fides - is presented against religious minorities: these accusations have an extremely harmful effect on the lives of the accused and their families". It then remembers "the brutal murder of Mashal Khan, a Muslim university student killed in 2017, because accused of publishing blasphemous content online". "Although his murder has rekindled the debate to reform the blasphemy laws - CSW notes - the state has been reluctant to introducing reforms due to the strong resistance of society and vehement opposition from Islamist groups, unwilling to accept its revision".
Representatives of religious minorities and leaders of civil society "continue to suffer targeted attacks in a context of community violence, provoked by Islamist groups", denounces the Report, which continues: "Numerous factors have contributed to the increase in religious intolerance: hate speeches by radical Muslim religious leaders, Islamist religious groups, also present in the mass media, which have a negative influence on young Pakistani people". These speeches, explains the text, "portray members of religious minorities as 'second-class citizens' generating intolerance, prejudice and discrimination against religious minorities". "Christian and Hindu communities - it continues - remain particularly vulnerable, especially women and girls, kidnapped and forced to convert and marry Muslim men", while "their families face serious threats and intimidation". This phenomenon is aggravated "by the unwillingness of the police to act and the weaknesses of the judicial system".
"Pakistan continues to struggle in the grip of terrorism. The attacks amplify the sense of insecurity and fear", concludes CSW, while the general scenario sees an erosion of human rights and fundamental freedoms, given the phenomenon of politicization of religion and the spread of a culture of hatred.
The Report calls for the National Human Rights Commission (NCHR), established in 2017, to investigate and prevent human rights violations, as well as to raise awareness about respect for human rights in the country. (PA) (Agenzia Fides, 25/1/2020)

AMERICA/PARAGUAY - Girl killed: being indigenous should not be a reason for discrimination and cruelty